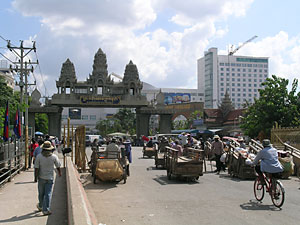 27 November. I have just had a very necessary shower after spending the day at the back of a moped that drove me around Battambang countryside. This is my first day in Cambodia after arriving yesterday directly from Bangkok, which I left at once towards the border town of Poipet. Getting into this country was like taking a rather sharp leap backwards from the Thai order, cleanliness and efficiency as I was able to observe in the few hours that I spent there. Seeing the clean bus station, the very condition of the bus in which I travelled up to the border was enough to get an altogether positive impression. On the contrary I got to the frontier on the look-out after reading all the possible snares that await the foreigner at this gateway to Cambodia.

I dodged many of them, but could not help falling into one, when I found out that foreigners are not allowed to use the local transports by the corrupt and conniving police, but rather made to travel on a share taxi at the preposterous cost of 8 $ per head, and with the obligation to buy more than one seat to be more comfortable… What is all the more annoying is that the fare is to the intention of foreigners only, of course, that are discriminated against the locals as a result of a presumption of wealth.

In the surroundings of Battambang that I have seen today, as I imagined, I have not found a single tarmac road, not even one carefully levelled, full as they were of deep potholes. National road 10 that connects two important towns as Battambang and Pailin was nothing but a wide dirt track. You could not say that traffic was heavy, but now and then some bigger vehicle passed and dusted everything and everybody over with a layer of a fine reddish powder.The most interesting thing of the day were not the monuments that I got to, but the look that I was able to take over the countryside and into the villages of this district. I reviewed plenty of houses, some very poor, scarcely covered with a few palm leaves, huts that I hardly imagine able to withstand the rainy monsoon season. Others were lovely houses on stilts mostly along the road and steeped in vegetation.I noticed lots of children: some stuck into my mind for the tragicomic situation I saw them in: deep in a pool of mud, they were going in and out of the terribly unclear and nearly thick water with their heads and pushed handfuls of mud to build a dam!

Many smiles greeted my passage, I was thrown some curse at by the woman who manages the "bamboo train", when I didn't accept to pay the hefty 6 $ fare to get back into town on that cart that runs on rails and is driven by an engine that a strap links to the wheels (they dare call it a train!). I preferred to make the most of the motorbike that was already paid for, also to finish off my powdering with fine road dust.Back in Battambang I went looking out for the many colonial houses, nothing to write home about, but pretty and orderly, arranged along the placid and not too wide river. I admired them as I strolled after drinking the plentiful juice of a coconut that made me feel much better from the dehydration caused by this humid and hot weather that induces continuous perspiration.

So begins my Cambodian adventure, the three weeks that I will devote to the exploration of this country.