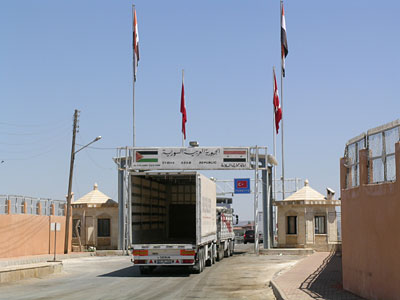 30 July - I have a fatira for breakfast in a sweets shop at the bus station. When I enquire about where I could get a cup of tea, the owner helpfully hastens to get it for me and accompanies my first meal with fluent conversation. I hit the road to Turkey, getting to Eezaz first and then to the border, that I cross after carrying out emigration and immigration formalities. I find myself in Turkey in an absolutely desolate frontier post. No buses or taxis. Only a car comes by at some length and I ask for a lift to Kilis where I take a bus to Gaziantep. I don't have one Turkish cent in my pocket and today is Sunday. I ask where I can change some money, secretely hoping to find something, or I'll never be able to pay the fare. They point me to the tobacconist's and there I do the transaction without even knowing the current rate of exchange (so I limit the amount accordingly), but I later find out that I was given a fair one.

I get to Gaziantep otogar, and leave right away to Kahta. I was able notice a change in landscape, much greener than Syria, but still grilled by a sun that stops the grass growing. More than that, I noticed a change in the outlook of towns and in the living standard. Be it as it may, but I like Syria with its dramatic Middle-eastern traits: secluded, isolated, dirty, illogical, fascinating. If it were too tidy or clean or developed, it wouldn't have its special appeal.

31 July -I have decided on a near suicide: join the dawn trip to Nemrut Dagi leaving at 2 am. I wouldn't like to waste the morning waiting in a drab town for the sunset trip. So, at 2.15 am they gently knock on my door and I resolutely, if not without effort, get up from my bed. I had retired quite early last night after a stop at a confectioner's where I'd had some baklava and tea, my supper. I wasn't very hungry, and I spent a very pleasant time in the warm evening breeze, cuddled by everyone who did everything to please and spoil me, like a pasha. I retired early, but I took a long time to get to sleep because of the tea.

Close to the mountain peak at 2000 m, we leave the van and start walking on a path still in the darkness. At the top we wait for the sun to rise in the cool morning air. The statues and their respective heads at their feet gradually come into the increasingly warm sunlight. I'm with two Turkish girls that don't speak much English, but still can express their genuine friendliness. The tour then goes on to touch other places of interest on a different road from the one we took to go up. I'm back at 9, have a shower and instead of surrendering to sleep as I had promised myself, I decide to stay away from the heat of my room. At 8 the sun was already hot and now that it's been hitting the window for over an hour, there is a dry greenhouse air inside.

At the bus station I learn that the bus to Diyarbakir will leave at 11.30. I have time to have breakfast at last night's confectionery and I have the impression that I am charged less than I should out of hospitality. I have two delicious buns and baklava with tea. The owner does his best to be amiable and a man comes to converse in English with me.

At the station the fist bus fills up without me being able to get on board. I wait for the following one – they say it'll be here presently. A boy brings me a plastic chair for me not to wait standing. I know I attract the attention as a foreigner and in fact some boys soon come to talk to me. After a quarter of an hour the bus arrives and we take our seats; I am at the front.

We cross colourful mountains of yellow and ocre patches, dotted with dark green trees without any other vegetation on the naked earth, cut against a clear blue sky. We get to the arm of an artificial lake that has submerged the road. The waters are of a beautiful light blue and reflect the golden yellow of the mountains.

As we approached, we saw a ferry leaving, so we have to wait an hour and a half to get on the next one. My seat companion invites me to have tea, a cake and a cigarette in the shade of the bar trellis. He patiently insists in conversing with me without a common language. He spent years in Istambul working as a shoeshine boy. I recognize in him the affability and conviviality that I had noticed in some Kurdish school mates in Tunis some years ago. Another guy joins us and we continue our basic conversation. Some words similar to Arabic that I grasp here and there, some Arabic words that I utter, allow many messages to be passed on. And time goes by without us getting bored.

After crossing the lake and getting over the high bank opposite, we are suddenly plunged into a landscape that belongs to an utterly different world. I'm in a flat and burnt steppe, dry, yellow; the sky has suddenly changed its colour and turned pale, washed-away, drab, like nature's colours at any rate. In the first city I change bus and travel companions for the last 90 km on this bleak plateau.

I get to Diyarbakir crossing suburbs of faceless buildings that seem to obliterate and sweep away even those who live in them – this is at least the observer's impression. I imagine such a place in the severe continental winter and think how depressing it could be. Any German town to which so many Turks have emigrated must offer more entertainment, surely?

I find my hotel, which isn't as bad as my two travel companions had pictured it, when they described it as old. I quite like it. I enjoy a walk around the town, busy with people buying and strolling. In the square in front of the mosque I observe the older men wearing typical Turkish-style slacks, playing, chattering, waiting dinner-time.

At dinner I get into quite a comical situation. I'm in a busy restaurant and I've ordered with a very down-to-earth method by pointing to the dishes behind the counter. The menu written in Turkish was unintelligible, and to be true, I'd eagerly set out to decipher some of the names with the help of my guidebook, but the process was going to be a long one and not exactly successful, so I gave up. I was nevertheless enticed by a dish of vegetables that I'd seen in the window, but it came to my table accompanied by another dish full of honey – and with a honeycomb as well – I suspected it may have been a breakfast dish. The waiter who came to pour me some tea confirmed this doubt.

But this is not all: besides the "vegetables" I was going to have some stuffed aubergines, that once again I ordered from the counter. Only after the cooked dish was served to me did I understand that it was actually grilled liver. To make a long story short I've had a very funny dinner, always with waiters buzzing around between the tables making me anxious.

It looks as if I'm in a different region of the world altogether, not in the Middle East, but in Asia. I recollect the proud and assertive statement made by a travel companion yesterday, that Turkey is part of Europe, maybe uttered in the wake of common sense or imparted knowledge. This uttering stirred a sense of usurpation in my unconsciousness.

I spend the evening reading in the agreeable hotel hall on a comfortable armchair surrounded by music coming from the TV set and the talk of people. After some time I am involved in the conversation by some youths that have come to take an admission test into the army.