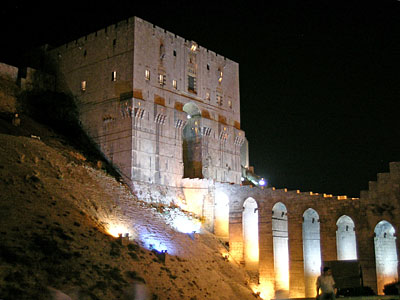 This trip has come to life without much long-term planning, as a backup plan to avoid the difficulties I would have come across in Lebanon, severely battered by Israeli attacks this summer. Arrangements luckily aren't always a prerequisite for success, and I have come back content and enriched with a great human and personal experience, which has also allowed me to catch up with old friends in Syria. But adventure and unforeseen events have not been missing either.

28 July -On the plane from Vienna I get a foretaste of the friendly Middle-eastern atmosphere when I meet Rami, a medicine student in Berlin from Damascus. On landing in Aleppo, though, I reach the climax: I am invaded by a strong emotion materializing in pleasant gusts of hot air that stroke my face; they hit me head-on, but instantly abate, as if not to hurt me. The low sunrays warm up the hues of the stone that the city houses are build with. I find a country in the splendour of summer, sometimes windy, as I well knew two years ago. I take a taxi into the centre and the driver asks me to teach him some useful English phrases to use with foreigners. I see a couple of hotels, pop into the Asia where I had previously stayed, but eventually opt for Zahrat ar-Rabie with a bed on the covered terrace.

I go for a walk around the Ommayad Mosque, now splendidly reopened after restoration; some of the central streets have been newly paved. The city lives its year of glory as the capital of Islamic culture. I notice with pleasure the spirit of peaceful coexistence conveyed by a placard bearing writings between the images of a mosque and of a church. I stroll slowly up to the wonderful fortress. People crowd the café opposite, a sort of Aleppo Qasiun.

29 July -I have spent a pleasant night lulled by the intermittent blows of wind that got through the open windows and stirred the air all night. Before starting the day seriously, I go to the cobbler's row by Antakia Gate and have a pair of sandals fixed, that I'd incidentally bought here in Aleppo.

I jump on a minibus to Maarra and then Kufranbal. The driver offers to take me for 75LS to al-Bara, one of the dead cities that I'm planning to visit. I can smell an intense odour of pine resin along the highway, that stirs up emotions tied to this country. They reach down to childhood memories, conjure up Greek myths born in this great common Mediterranean space, that saw and still sees exchanges and clashes of goods, cultures and civilisations. Such a natural perfume can even get to touch the soul. 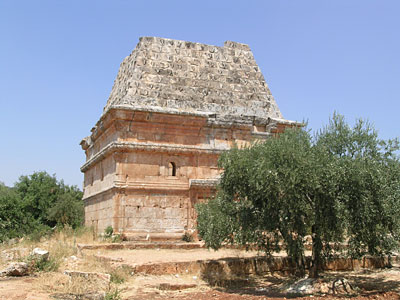 I visit the charming ruins of the Byzantine buildings scattered among the olive trees. I then walk down to the village and take the road to Serjella. A youth, whom I ask to fill up my water bottle, offers to drive me to the ruins on his motorbike (Allah karim!) and so saves me from a wearisome way. The buildings are grouped over a limited area here. It's very hot, the sun is scorching and the wind annoying, in spite of relieving the heat. After the visit the caretaker points me to the more beaten road for me to hitchhike on. A peasant driving a van picks me up and drops me at his village where I can then take a service bus to Maarra.

I walk around the town, then sit down at a restaurant for a dish of hummus that gives way to a long conversation with the restaurant guys.

Back in Aleppo I stroll around the Armenian quarter, Jdeide, then to the Citadel that I'll never get tired of admiring. I go back fatigued to the hotel. I try to give Saadallah a ring, but the line is always engaged. I then stay chatting with the phone boy Khalid, who gives me a Syrian version of recent affairs in the Middle-eastern region, amongst which Rafiq Hariri's killing of, of course at the hands of Israel.

This day has also given me the opportunity to get back to the creativity, or should I say the irrationality if I judge through my Western eyes, of the Arab world; call it as you like, it's an attitude that just amuses me. I saw a car standing right in the middle of the Bab al-Faraj crossroads in the heart of the night, with a man stretching under it trying to repair something. And again: the minibus this morning was full-up, and all seats were taken even in the aisle. I then heard some passengers suggest that a boy should get off through the window… but luckily the pane wouldn't slide open.