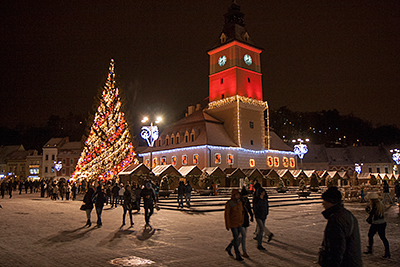 I hadn't seen much through the minibus window of what must have been a lovely journey across the mountains. At Brașov it was still snowing lightly at 7 pm, and it felt too cold to walk to the hostel. In spots ice sheet made the pavement rather slippery. Minus eight, displayed a red led thermometer in the street.

The next morning was even colder. Brașov lies protected by a high hill to the east that also blocks the early sun. A bluish tinge filled the streets, and a thin layer of snow on the steep roofs made the hue, and the sensation, even colder.

Last night I had walked along the main drag, all decorated with a ceiling of Christmas lights. In the central square stood a Christmas market around a huge Christmas tree with red and white lights. Warm red was also the glow that illuminated the town hall tower as if in a desperate endeavour to melt away the bitter frost. Now the morning sun would gradually sweep over Brașov and keep the cold at bay as long as daylight lasted.

You can admire a stunning view over the Saxon city centre from the top of the hill, about 350 m higher than the orderly grid of streets around the town hall and the Black Church. The old Italian-built cable car took me and a handful of passengers up to the top.

Three of them were speaking Arabic with a Levantine accent, although not probably an urban one. I asked them if they were Syrian, but they answered Israelis. "From where exactly?" I asked. "Near Haifa". A bell rang in my head, I have friends in a town nearby, have been there and know people. Finally, it turned out they were indeed from Faradis and we had plenty of common friends. What a coincidence!

We strolled around the top, chattering and taking photos of the fantastic view. We were standing next to the big white letters of the writing Brașov that it lit up at night in order to be seen from below. The town, which still lay partly in the shade, was surrounded by a vast plain scattered with glittering snow. On the southern side the range of mountains decreed the abrupt end of Transylvania.

I visited the town museum, had lunch – again a dish of sturdy Romanian flavours with at least some mild-tasting polenta. Choosing from the menu is often like a quiz-game to find the least stodgy item in the list, the names may sound familiar, the English explanation more than satisfactory, but the experienced traveller knows that an overabundance of ingredients will only make an elaborate dish with little refined taste. Not a gourmet experience.

The train station hall was a typical Communist era design. A huge bay window opened to the front to let see the faded colours of the winter scene outside. A concrete geometrical pattern decorated the top ends of the side walls – very 1970's. The rest was lined in light stone and travertine.

The train took me to Bucharest for my last night there. The following day I was already due back home 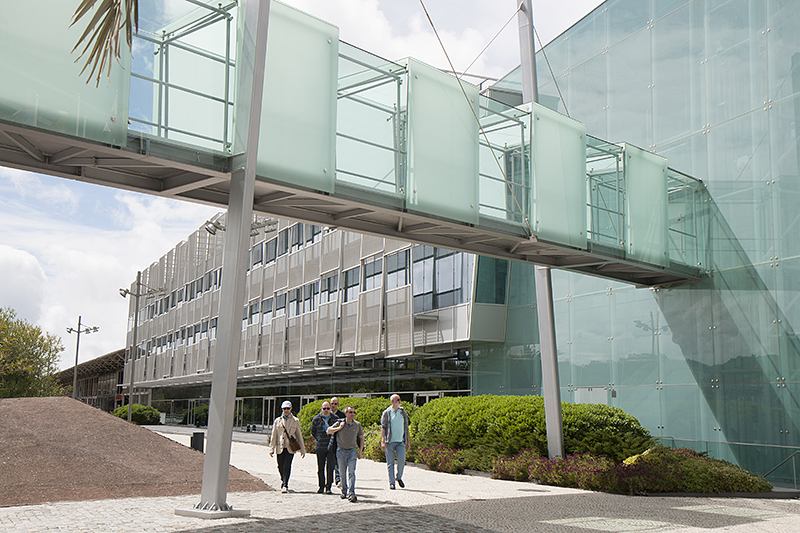