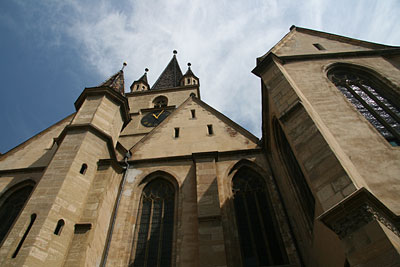 Sibiu presents itself under a beautiful clear blue sky today, a change from yesterday’s rainy weather. The striking feature of this city was until recently the presence of a considerable Saxon German minority that settled in Transylvania as early as the 11th century and left a strong legacy that became intermingled with other Romanian cultural components. In the 19th century, though, the population that had lived here since the Middle Ages was confronted by the hardships of war, deportation and the dire straits of the communist regime, and when finally in the 1990’s the iron curtain was dismantled, the Saxons were the first to flee the country to join their ethnic fellow countrymen in Germany and Luxemburg.

A figure that illustrates the phenomenon is Lutheran church membership in Sibiu that plummeted from 14,000 in 1989 to 1,400 one year later, eloquent enough to appreciate the magnitude of the change.

If the Saxons have moved away, what remains now is at least a peculiar architecture in a city shaped until very recently by this cultural richness, which is unfortunately doomed to disappear in the short term with the last old settlers who chose to stay becoming extinct. Sibiu and the surrounding countryside are dotted with Lutheran churches, after the Saxons joined the Reformation movement like the northern Germans. The roofs are very steep and they have funny eye-shaped windows that open in their large pitches.

I cross the central square and take one of the side streets to reach the hostel. In 2007 Sibiu was appointed the European capital of culture and the city underwent considerable renovation, the square was repaved, the buildings manicured, some of the roofs fitted with new tiles. They still look too new in comparison with the age of the buildings that would call for surfaces stained by lichens, moulds and humidity.

I catch sight of a pavement out of repair in a back street and think that must have been the general aspect of the place before the turning point, even more during the long decades when Romania slipped off limits for visiting crowds. In a way, the fascination of those times is lost along with the old tiles of the roofs. 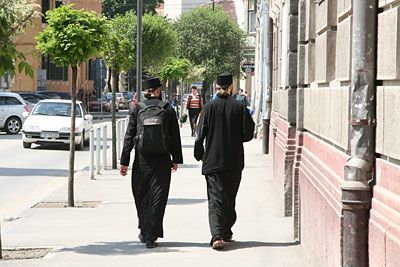 In the tower a war photographer’s exhibition displays old black-and-white shots of WW2 and other significant events in the cold war years. What strikes me is the amount of national character expressed by the portrayed people: that was a time when Italians were Italians, the Spanish the Spanish and so on, long before being blurred into a indistinct mash of global fashion. Now the desire to be alike drives us more than a desire for authenticity.

Visiting the Orthodox cathedral after the Lutheran church is like changing planet. While the first had scanty and sober decoration (apart from an outstanding fresco in the apse) and pointed arches, here it’s round arches and a profusion of wall paintings, icons, gold decorations and colours everywhere. The very style of worshipping parallels this sharp turn to the East in the atmosphere: people prostrate in front of the iconostasis and light candles to the icons in a very oriental way of praying. In a few hundred meters two souls of this city have their landmarks to signify that western and eastern Christianity meet here in Romania.

Peter was smoking a cigarette sitting on the edge of a skip, not being very productive. He saw me take a snap and when I passed abreast of him he asked me if I was from Germany. I said no, but we continued speaking in German, which he’d picked up from 1990 to 1994 when he was working there. “Just think”, he says, “now I make 10 euros a day, but there it was 10 euro an hour. My contract expired so I had to come back, but I’d like to return in the summer, now that Romania is in the EU.” 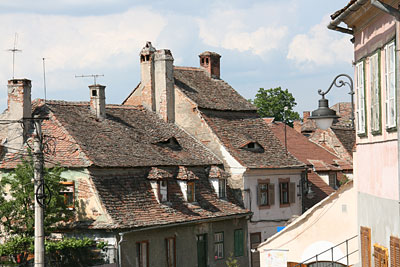 Living conditions are not very easy here, and dreams of working abroad haunt many people’s minds. The bus stations advertise incredibly long trips by coach to as far as Madrid and a host of other provincial towns in Spain, Italy, etc. where Romanian communities have settled. The huge gap in salaries and in the cost of living with other EU countries is here to see. I shake hands with Peter taking leave. Maybe he didn’t expect me to do so because he was doing a rough job and had dusty hands, but after he’s given me his point of view I feel we have become friends.

Students are the true protagonists of their graduation day. The girls are wearing high heels, short skirts, colourful fashion clothes; next to them sometimes grandparents are here to take part in the ceremony wearing dark clothes over their plump bodies fed by decades of sour cream, very unlike the still slim figure of their grandchildren. A pair of dark trousers for a grandmother may be the most daring transgression coming from a generation still faithful to its old ways, originating from who knows where in the countryside or the outskirts of the town. I wonder what they make it of the university experience and the changes they witness from the past, when life would flow along different lines altogether.