The Sibiu hostel kitchen is well equipped with every possible utensil and appliance, except for the tin-opener, which should take the place of honour in such a space. Upon spotting this haven of homeliness, I opened all the cupboards on the lookout for condiments and other ingredients that would allow me to cook a dish without having to buy whole bottles or packets.

Indeed I made inspiring discoveries. Not only were the spices present in large amounts and varieties, but there were also leftovers of rice, beans and other foodstuff. Only the oil was very scarce, but I trusted I could do with the bottom-of-the-bottle quantity left.

Based on these cues the menu was quickly drawn: sautéed vegetables with barley at noon and baked beans for dinner, the only possible hindrance being that the beans wouldn’t have enough soaking time to become soft and be cooked in a reasonable delay. 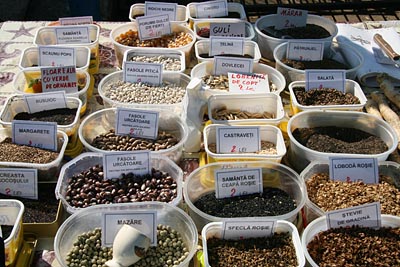 I went out for the groceries in the nearby supermarket planning to cook them with some canned tomato, but when I discovered the tin opener was not to be had, not even from the bar downstairs, I put off using it until I’d find a tool sharp enough to force it open.

The lunch came out a real treat, but the beans at dinner were still a bit tough in spite of the long cooking time, which incidentally required me to keep on stirring them because the heat from these rings was intense and not adjustable.

Only two other guests are currently at the hostel. One seems to have had an outdoor experience, because he’s spread all his trappings in front of his berth and these include muddy walking boots and hiking maps as well as lots of other tools, although, ironically enough, not a tin-opener. I’m glad at least to have had the idea to ask him, otherwise the only contact would have been polite but dry answers to my salutations whenever we ran into each other. Now, the tin-opener could have been an excellent ice-breaker, but obviously this bloke was not in a conversational mood, and my question didn’t stir him out of solitary mode. The other guest is an English-Australian guy, quite reserved and often focused on his netbook writing his travel diary, but I managed to strike up a conversation with him a couple times in the kitchen. He’s a bit introvert too, and if I hadn’t taken the first step I think we’d have parted having exchanged the same 5 monosyllables or so over a couple of days as will be the case with the American. In the course of our talk he dropped a hint at the other one being so silent, which indicates that a degree of interaction is desirable even when people don’t seem to show they need anyone else.

For me hostelling is travelling independently like this, having the freedom to cook your own food if you feel like it and meeting other people in common spaces, if possible talking not just about the countries “you did”, but also about other subjects that give you an insight into other ways of thinking and being.