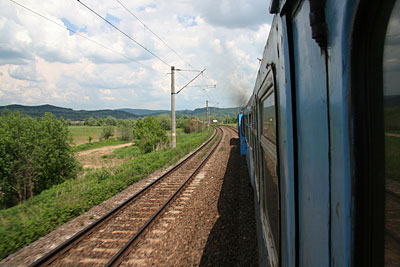 I caught the train by the skin of my teeth! From the road I saw a handful of passengers that looked as if they were preparing to get on a coming train, but I was not on the right side of the rails. Between me and them there was an area occupied by heaps of gravel and sand and some men working. I thought that if I didn’t have a try, I’d end up waiting for ages, so I made a dash through the area – nobody even took notice – and I scrambled up the embankment to get in front of the train just as the first passengers were alighting. I asked a young couple for confirmation about the destination and while the train was starting to move, these two waved me goodbye as if we’d known each other forever.

The rattling sound of the train rocks me and lets me enjoy the views slowly reel by. From time to time it stops to let people off who cut across fields and reach their lost villages. Then the diesel engine puffs and pants to set the train in motion after the stop and the fumes get in through the open doors. I stick out my head for a breath of fresh air and to watch the line of blue carriages covered by corroded iron sheets, as a curve approaches. 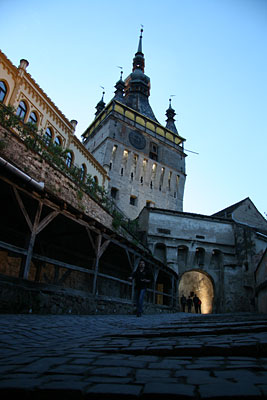 Sighişoara’s highlight is the citadel and its beautiful tower that is simply magnificent from whatever angle you observe it. In the evening it’s floodlit and looks more romantic still. There’s an event going on tonight, and youngsters have stormed the hostels, so I take a bed and breakfast in a quiet house with a nice veranda.

The unsealed cobblestone in the town looks so natural, with no mortar to keep the rain from seeping into the ground. During the heavy downpour spurts of water gush out of the gutters and run in the mid-street channel.

I pay a visit to Saturday’s weekly market and watch people do their shopping. While I’m here I can’t resist buying some of that white cheese that looks delicious. Also the vegetables, and the carrots in particular, look authentic, smeared with earth, knobby and crooked; they must have a real carrot taste, unlike the ones that are now on sale in my country.