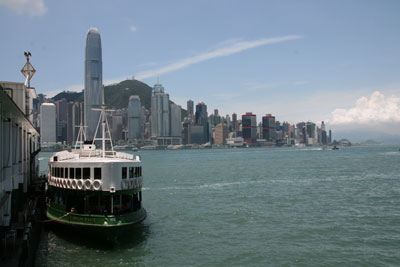 Yesterday I was asked about my home town and I set about describing its general features, starting by size. I must confess I unconsciously took on a guilty tone of voice as if currently being in metropolis like Hong Kong made me feel in need of tendering an apologetic justification for living in what suddenly seemed to me as an uninteresting anonymous place unknown to everybody.

Then I questioned this involuntary silly reaction of mine and thought, what is it that really makes a place vibrant? Is it the number of residents or the extension of the city or the amount of shopping centres that enlivens its scene and brings a constructive ferment to its cultural life? Maybe a place like Hong Kong, all set to cater to the needs of huge crowds of visitors on a incessant shopping spree, doesn’t leave much room to more creative and intellectual pursuits, apart from the architectural prowess that is the shaping of Hong Kong’s skyline and the supply of some low-profile entertainment that visitors don’t seem too eager to request.

Again, most of the goods on offer here are foreign-designed (if not also foreign-produced) and are perceived as high-quality precisely because of that. No Chinese goods would conquer Hong Kong visitors, at least not for the time being. The local market is totally dependent on a concept of fashion, luxury and trend that is created overseas for consumption here and the crowds easily swallow the bait.

But not only are the spending habits of the well-to-do something that leaves out completely the local creativity, it is often an alien pattern of modernisation that is unquestionably embraced, which denotes a Chinese lack of self-confidence and maybe even a complex of inferiority.

I personally think that in due time the welfare that has already reached the eastern coastal cities of China will seep through and activate a cultural level, eventually giving rise to a class of intellectuals and artists, that obviously are a product of an affluent society. But of course this will be subject to an evolution of the individual’s scope of action towards a higher stage of involvement in the civil and political society that will entail the freedom to have a say, express critical opinions, protest and make administrators accountable. All things lamentably lacking in today’s China.

Large swathes of the population living in Hong Kong’s high towers are probably just functional to the economic system in as much as they work and consume. They are not meant to participate much in the construction of anything other than their lives and personal welfare.

Nor are they are intended to play a role in the economy of culture that has caught on in Europe and is now an economic asset. Although this is sometimes not untainted by logics of marketing, exploitation and consumption, at least it has the advantage of educating those that make use of it. Here, on the contrary, I see many cogs in the machine that spin quickly and indefatigably, maybe hardly interested in anything that attains to the cultural sphere.

I for a start ought to make amends for experiencing Hong Kong at this superficial level, distracted as I was by the hustle and bustle of its street life and not expressing the faintest desire to visit a museum or a cultural institution. But surely this is not what people come to Hong Kong for.