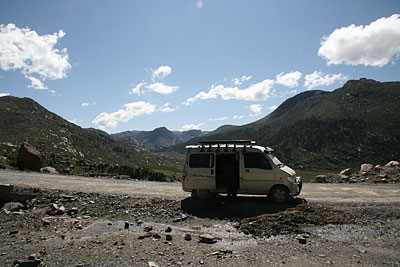 The alarm goes off at am, but I mess up with the phone and find myself unable to put it off. As I don’t want to wake everybody up, I try to muffle the sound by running to the bathroom, where I have nothing left to do but turn off the phone altogether. As soon as I’m ready, I knock at the landlord’s door for him to let me out of the locked gate into the still dark streets. Around the minibus station there is already a stir of people getting onto two buses to Yachen, but I don’t have a ticket and the seats are all sold out.

Outside there are minivans and more people trying to secure a seat to the monastery. I spot a Chinese couple with backpacks, likely to be tourists heading there. They negotiate with a driver to charter a vehicle, which we soon fill and drive off.

After the bridge we take a road that climbs up a valley still steeped in the shade. I realise how chilly the air is when we have to stop for a puncture. The sun beams have only reached the opposite side. The backlit mountains above us may not give the best of themselves now, but are nevertheless an imposing sight.

Soon the climb resumes along the road that leads up to a high pass. Somehow I had expected that being Ganzi at about , it would be a smooth ascent to Yachin’s altitude of . I had not considered that in this mountainous region, every valley is separated from the very next by ridges you only get over by arduous climbs on roads cut in the steep slopes. Lots of curves are needed to make a gradual ascent to the pass that needs to be conquered. Hardly a move in my itinerary has not involved the crossing of a high pass.

On the other side the road is simply spectacular, if you disregard the perils inherent in its being at a dizzy altitude, on the brink of a sheer drop and beaten by a series of vehicles that our driver seems so eager to overtake. His driving is a bit too fast for my taste, especially on a potholed unsealed road like this with a constant precipice at hand. An overturned taxi on the verge with a smashed bonnet comes into sight to remind us all of the danger.

After four hours we are at Yachen, on the highlands. Plenty of pilgrims are flocking in after the recent death of its spiritual leader. I expected to find less than basic accommodation in what I pictured as a punitive monastery I was imposing on myself to stay at for the sake of discovery. However there is a full-fledged hotel, something absolutely out of the blue. It’s actually even too luxurious for my standards, the only weak spot being the toilets that have no running water or showers. The Chinese tourist has followed me from the bus stand and suggests we share a room.

I’ve been observing this bloke since we were in the bus. He’s equipped with an adventurer’s outfit, such as a massive Swiss army knife, a large brim explorer’s hat, a professional camera, sports sunglasses that struggle to fit on his low nose, and brand-name sports garments. There are few independent Chinese tourists around yet, but this takes himself very seriously.

In the room we introduce to each other. “My name is Niong”, he says. The syllable sounds unusual to me, so I venture, “This is not a Chinese name, is it?”.

He replies: “I am of the Mongolian race. Jin-ji-si-kan!”. In fact his facial features should have given me a hint, if not to Gengis Khan. I can’t hold a very entertaining conversation with my Chinese language skills, but enough to understand that he’s quite a character.

As I go out for a stroll, I realise my camera is not in the bag, so I return to the room to get it. The problem is that it’s not there, either. Niong sees me perplexed and says: “Màn! Be calm, think where you could have left it.” I am calm, but the camera is not to be found and I can’t account for it.

Niong, himself a photography buff, asks: “How many pictures did you have in it?”

He taps his head in distress and looks as upset as I should be. On the contrary, what has come over me is a mixture of acceptance and resignation, maybe only later to be replaced by bitter disappointment. 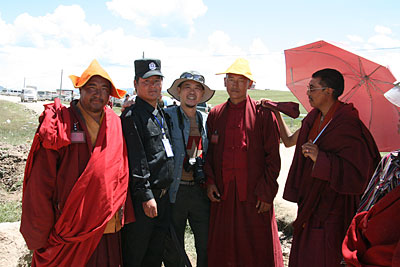 Niong orders imperatively “Qù! Let’s go!”. We amble back to the bus stand, where our vehicle is still parked, locked and with no driver. Through the dirty windows I can’t spot anything left behind though, so my hopes are very dim. I may have dropped the camera bag and it may have got stolen. A long desperate search for the driver starts, that involves the police (who I get photographed by in front and profile for their rogues’ gallery), countless monks and people who all end up knowing about my case.

I’m finally told to wait at the parking lot, while Niong and the policemam will search for the driver elsewhere. It’s funny, but the uneasiness I feel is rather due to not carrying out my duty of returning home with memory card-loads of photos and I’m uncomfortable about having to justify this to people. They will be the scales of my failure. Furthermore, I’m not much disappointed for losing a valuable apparatus, but for being unable to retrieve the records I had made, as if by this I had never lived those moments.

On the other hand, at a short distance I can see the altar used for sky burials and this sight urges me to give things their true value. In this monastery of renouncement and mortification, before the very place where human bodies are fed to rapacious vultures, isn’t my lost property a ridiculously trifling thought? Free yourself from attachments, life is transient, all will perish, I am reminded.

At long last the driver is located and he opens his vehicle, that turns out to be a different one but of the same make and model, from the minivan whose panes we’d wiped clean and had peered through. The camera appears under a seat. Niong bursts out in an outbreak of joy, hugs me and cheers up in his loud voice. I have to force myself to appear as happy as I should be, but indeed I am relieved.

We can have a late lunch, now.