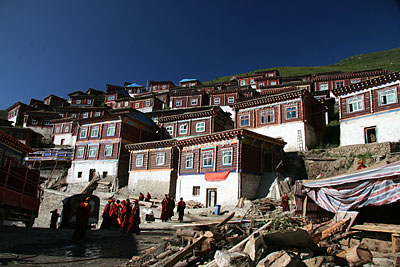 Last night I went to bed thrilled by this extraordinary place, but uneasy with the thought of having to return on that awful road. Niong had in fact announced to me that we wouldn’t be able to continue to Dege. Whatever buses could be had to reach it, would leave from Baiyu and that would in any case leave open the safety issue, as that road is also said to be quite bad. We are therefore thinking of going back to Ganzi.

The morning sun radiates over the mountains and the monastery is awash in bright light. The monks are attending to their morning duties, buying things from the only shop and getting organised for the day.

Niong and I will descend on the vehicle that has been sent for by some monks going to town. We leave very loaded with luggage, parcels and extra children that squeeze into the interstices between the regular passengers. I had been waiting for this minivan in the same state of mind as a man waiting to go to the gallows. The memory of yesterday’s ride, first along the terrible river and then up the mountains, didn’t leave me much respite.

With added inertia from the passenger load, we start the descent. I strike up a conversation with a nice greying monk sitting on my side. He asks me the reason of my travelling: “What makes you want to visit faraway places? What are you after?”, he enquires. He’s not expecting from me the answer that probably most visitors to his monastery would give, that is a Buddhist pilgrimage. I am a different case and I like his effort to understand me who have come from a different world. However it is, it may not strictly religious, but travelling is always a sort of search, for one’s own self and for the other.

He then explains his tasks and the principles of his faith, stressing the importance of peace and understanding. He’s sad to say that there is another religion in the world which does not strive to achieve the goals of peace and tolerance. I can feel there are bridges between us when I recognise the values that were also part of my education.

I am calmed by this talk and understand the material comfort that religion gives. It may be the most blatant man-made delusion that poses itself as absolute truth and produces clashes between cultures who claim to be the sole depositary of the ultimate revelation, but at grass root level it is indeed a comfort to an afflicted soul.

By the time we get to the river I am soothed. The daylight is shining bright over the valley too, and the threatening river I saw yesterday is still a mighty waterway, but it doesn’t look ready to swallow anything passing on its banks. The driver lets us down to admire a surprising pyramidal peak that rises between two mountains. Below, the slimy water flow steadily along. 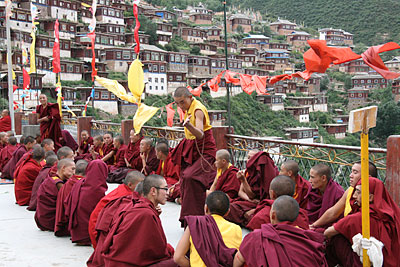 At Baiyu we have to organise tomorrow’s move. The bus won’t available until in three days’ time, but luckily there are monks going to Ganzi who we could share a chartered minivan with.

Baiyu monastery dominates the whole town with its cabins spread over a vast area of the hill. The temple terrace on the far side is occupied by numerous monks sitting in circles. In each, one or two individuals are standing and use the traditional debating technique during which they expose their arguments and cut the discussion short with a theatrical clap of their hands. They mime expressions and postures, before the outstretched hand behind the body hits the other arm in front with a gliding movement. Strings of yellow and red flags flutter happily in the wind.