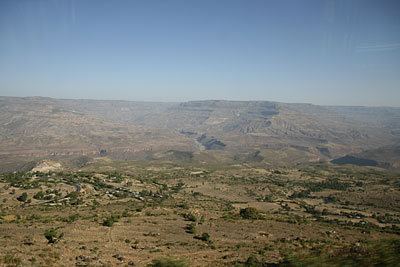 Today is the day of the great move from Fiche to Bahir Dar, for a total of 364 km. Such a day could easily be dismissed as uneventful, with a good share of its daylight hours spent sitting on board a bus. However, the nature of this journey was the thing that brightened my day because it gave me a worthy introduction to the grandeur of the Ethiopian landscape.

I was up early – but not excessively so when compared to the time buses usually start in this country – and stood ready to catch the first bus that would come along from Addis. It was a rather comfortable vehicle that ran along a rather smooth road.

The highlight of the journey was definitely the crossing of the Blue Nile gorge, where the high plateau gives way to an incredibly deep but immense canyon – part of the Rift Valley. The road drops in successive bends by as much as 1,300 m, crosses the river Abay, or Blue Nile, and climbs up again on the opposite side to regain the lost elevation.

I had dozed off by the time we started our descent, but the woman on my side nudged me awake, probably expecting I would get a kick out of this incredible natural spectacle, which was definitely the case. She even gave up her window seat for me to enjoy a better view.

The higher ledges are naturally adorned with a beautiful variety of cacti that grow in the form of vigorous trees with leafless branches stretching out upright towards the sky. But since the valley is so deep, the drop in altitude soon makes the climate unsuitable to these plants and other forms of vegetation take over.

It took a while to wind our way down to the bottom. The sheer vastness of the scenery made me wonder at what particular point we should be crossing the river. I stood in expectation asking myself how wide or tumultuous the Blue Nile would actually be and what the Italian-built bridge would look like. 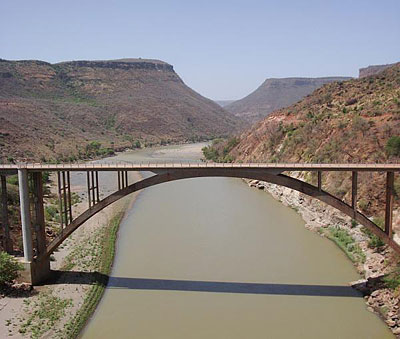 The last stretch of the road in fact revealed two bridges: a modern one, built by the Ethiopian-Japanese cooperation, and the other about 70 years old, built by the Italians. The old bridge looked sadly neglected in a state of abandonment after dutifully serving to unite two territories that had been forever severed by the formidable natural barrier. Streaks of rust from the iron reinforcement have started to stain over the grey concrete pillars. It looked like a familial work of civil engineering stranded in an alien environment.

It’s two eras siding one another: the gentle ornate arch spanning over the river has now wound up its long-standing service in favour of a rigid slab of concrete suspended by massive steel bars. Below the Blue Nile flows tamely in a rock-lined crevice, the course of water destined to outlive the two and hundred other bridges that will be constructed to replace the failing ones.

I finally arrive at Bahir Dar and find myself a room in a local hotel that has a series of rooms opening onto a spacious central courtyard doubling as a restaurant. It is quite popular with locals and no foreigners are staying here at this time. It looks like the perfect place for me.