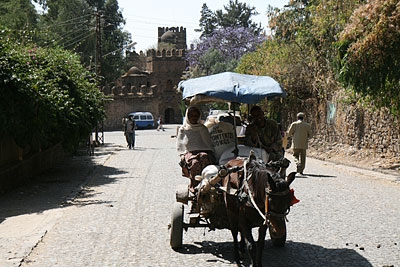 Of course Gonder has much more to it than what I have described of its 20th century architecture, which, incidentally, must be of no interest to everybody but the occasional freak like myself.

In the way of more commonplace attractions, Gonder has interesting buildings, some standing and some in ruins, that date to the time when it was a capital in the 16th century. Yesterday, I started my tour by taking a pleasant walk to an ancient church lying on the outskirts of town that boasts outstanding wall paintings. I was glad to reach it on foot, unlike all other visitors that were driven there in private cars or coaches.

A walled precinct protects the central building like a fortress. Centuries-old juniper trees with contorted trunks stand around like soldiers on guard, towering above the buildings and the visitors alike. The frescoed walls inside are remarkable indeed and recount biblical tales in the language of images. There wer only a handful of people around, and the tranquillity of the place lulled me into a state of bliss.

The morning I devoted to a visit of the royal enclosure. It’s a vast area scattered with various buildings construed by successive monarchs, all made of stones and no plaster. They stand quite high and the first one I encountered had a singular structure with turrets at each corner, topped by rounded domes reminiscent of Portuguese military architecture.

I emerged from the compound after a comprehensive visit and was greeted by two children selling chewing-gums. They offered to take me to Fasilidas pool, an important landmark that I agreed to visited more on the urge to be a conscientious tourist than by true conviction. I may not have thought much of it, but it was really a suggestive spot. The pool, used for ritual purposes, only had a remnant of stagnating water at this time of year, but enough for strings of colourful Ethiopian flags to reflect themselves in it. The old trees cast fresh shade and formed intricate patterns with their astounding roots above the ground. 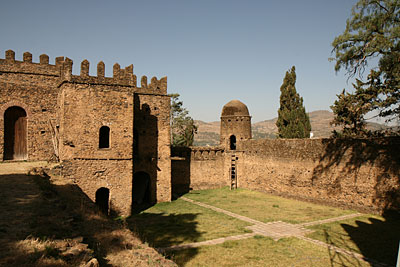 By the time I’d finished, I was hungry and thought I’d go to a restaurant to have injera. The children, who had probably been looking forward to this moment ever since they decided to accompany me, followed me into a local venue and I invited them to eat from my platter. I wasn’t fully prepared at the speed at which they gulped down mouthful after mouthful of food. Eating from a communal dish means that the quickest eats the most, so if I didn’t want to leave the place with an empty stomach, I had to adapt and start grabbing my share at their rhythm.

They were lovely children, one Muslim and the other Orthodox and such great mates. When I walked to the bus station, always escorted by them, I had already entered their circle because Yusef was lovingly holding my hand looking at me as a father figure.