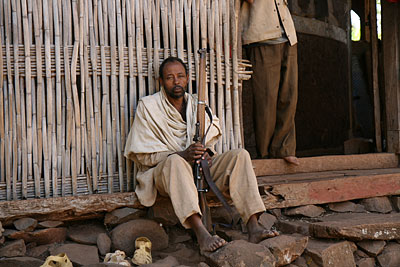 The bus ride to Debark takes about four hours and runs mostly on a dirt track. The elevation gradually rises to 2,845 m, the town lying on the foothills of the Simien massif. Cramped in my tiny seat with barely sufficient leg-room I dozed off, only to be startled awake by a disquieting side movement of the bus. I felt like we were sliding down the slope and we were done for, so I let out a cry that made the people around me smile.

Having broken the ice, the boys around me advised me to stay awake and alert when riding on this sort of road surface. Abianeh informed me he and his team were going to fight a boxing match in Debark tomorrow, as they do twice a month in a different destination around the country. Sport has become his great ambition and whatever he does, he always has one goal on his mind, to become a famous boxer.

When he’s not training he tends his goats and leads them to browse on the pastures that look so dry in the present winter season. His family have no cattle, because a head can cost in excess of 5,000 birr and they are poor.

What wealth peasants have here is usually stored in a peculiar sort of bank account, livestock. It’s an investment that yields interest in the form of offspring and can suffer capital losses under the effect of diseases. But most notably the hoarding of this wealth is as damaging to the environment as has financial speculation proved to be to the public good.

This is patent in the Simien where the common mentality is striving to cope with the ties imposed by the national park and the rules to protect its environment. The main blight of the park is deforestation that results from a thirst for pastures on which the herds of goats feed on. An attempt to curb the felling of trees and diversify the source of income has been made by different organisations by trying to capitalise on the flow of trekkers attracted by the wonderful mountain scenery.

The locals haven’t been reluctant to take this opportunity, but the income generated by this channel has typically been invested in livestock, with the effect that the numbers have swollen and the pastures are still in high demand. The issue of deforestation is so serious that if it goes on at this rate it may threaten the title of World Heritage Site.

Be as it may, Abianeh has only boxing on his mind and probably the cash prizes he may eventually win. His coach claimed to have had a dream in which Abraham announced that he was destined to great successes in boxing. Blessed by divine sanction, Abianeh has given himself heart and soul to this sport. 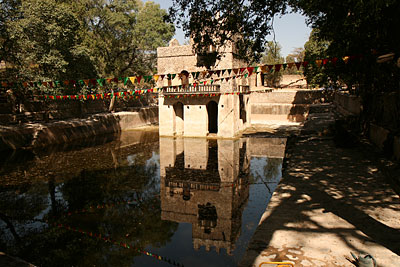 Funnily, the logic of motivation is not different from other countries. Once I heard a colleague at work say that her young son’s tennis coach was encouraging them to keep up the effort because there were big potentialities in him. I don’t see how the coach could have expressed a negative judgement, given that he was marketing his services and saying exactly what an eager mother wished to hear. Here, the coach calls Abraham into play, but the substance is the same.

I got to Debark just in time to find a room before sunset and very unexpectedly managed to organise a trek there and then. I made contact with two Israelis who were nevertheless more interested in going on a longish 8-day trek, and finally a Japanese long-time traveller who was meant to leave on the trek this morning but was stranded when the car turned up full. He’s a bit tight on money and would like to do just two nights sleeping at the same camp, but I talk him into the three camp option that will allow us to enjoy a varied itinerary and see the best the park has to offer.

I finalised the arrangements while I was having my dinner with a double injera ration. The two kids who wolfed my lunch had got me starving.