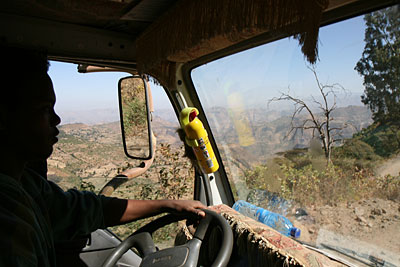 A refreshing glass of beer on an empty stomach before tackling the injera made me slightly intoxicated, but the effect was certainly compounded by a very long day of travelling. It’s night time and I’m tired, but at least I’ve made it into Tigray, the northernmost region of Ethiopia, along a border with Eritrea that is administratively as well as linguistically relevant, for here Amharic is not the native language anymore.

Finding a vehicle to move on from Debark this morning was highly stressful. With buses leaving Gonder already full-up, the only way to secure a seat was reserving one from the start by phoning the bus station. By I refused to submit to the avaricious terms that the bus boys proposed, which would have made to bus fare rocket to three times its official amount. I decided to see what came along and saw that the only way out was by lorry. Even so I didn’t have a free hand in the negotiations because bands of loafers can’t find a better occupation than pose as brokers. They swarm around any incoming lorry in order to suck a commission at the expense of the traveller.

Besides, lorry drivers make a cartel, well aware of the shortage of transportation, so the fares they ask are uniformly ridiculous. In the end I yielded to their requests and jumped into a mid-weight lorry bound for Axum.

In the cabin the young driver turned up less surly than he had appeared during the bargaining and he was the first to open to dialogue, a little in English, but mostly in what Arabic he picked up during his trips to Sudan and by receiving a Muslim education, perhaps. There is also an assistant and another passenger in a threadbare brown suit over a shirt that doesn’t look quite freshly laundered.

This man spent most of his time trying in vain to put through calls from his refractory mobile phone. Then, realising the problem lay in the battery, he spent the rest of the time charging it with an array of cables plugged into the cigar-lighter, none of which seemed to do the trick. When he occasionally got through to somebody, he made himself comfortable by poking his elbow into my thigh. Maybe this helped him shout better through the handset. 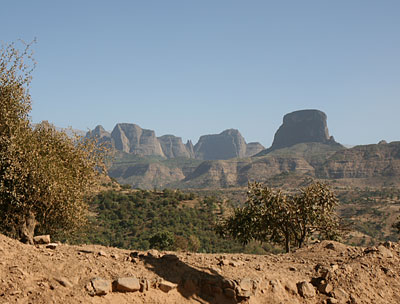 At 2 pm we pulled in at a town which I believed to be Shire, but referring to my map, I saw we were only 75 km on from Debark. Worked out in figures, this meant we’d been travelling at slightly over 20 km per hour, a confirmation of which came when I later observed the speedometer needle staying constantly around this mark, with occasional hair-raising accelerations to 35 km per hour on particularly smooth stretches of the road. Axum lies 185 km ahead and so it was no surprise when the driver said we’d spend the night in Shire – when and if we’d eventually reach it, I thought to myself.

The reason why the going is so slow depends on the poor state of the road surface and the nature of the vehicle. This road must have received no maintenance since the Italians built it in the 1930’s. It’s a remarkable achievement of civil engineering, especially after Debark where the road sinks into an amazing depression, curve after curve, clinging to a next-to-vertical cliff. Above in the sky big vultures and eagles soar with their impressive wings fully stretched.

We had lunch at a local restaurant and the mysterious phone-addict paid my bill. I started to think he was more than a simple passenger and the suspicion was confirmed by the driver saying that all the load we and our sister lorry were carrying belonged to him. He tried to explain the nature of the goods, but I was not any wiser, so at a stop I secretly inspected a sack pulling apart the mesh and tiny grains came out, of an unknown species of corn or legume.

The sun was setting as we started our descent towards the Tekaze river that marks the internal boundary with Tigray and flows into the Sudan. We dived into this impressive valley following the dusty wake of the lorry in front. An old Italian fort defending the bridge stands deserted, riddled with bullets. On the other side the rough road was over and we peaked our speed. We passed an Eritrean refugee camp, where living conditions seemed as appalling as permanent, the only luxury being the UN cars that are supposed to bring relief.

We finally passed the barracks that are scattered around this border region and arrived at 10 pm. Off-duty soldiers are trooping into town to spend the night. Given this premise, needless to say the place is a giant brothel. Music comes out of seedy nightclubs and wafts of incense streak out of doors ajar. I am left to spend the night in a hotel that has no running water, wrapped in my sleeping bag, besieged by fleas.