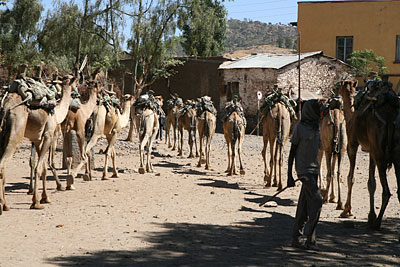 Not long after a chanting voice had started blaring out a hymn from a church loudspeaker did I hear a knock on the door. It was well before 6, but the merchant was already calling me to resume the journey. We crossed the deserted streets and on the main road we found the lorry waiting. The sky was still dark, apart from a bright glare to the east that in the matter of an hour conquered what was left of the night.

At 8 am I was in Axum, the streets just waking up to a new day. I have a decent hotel room and am eager to make the most of my time, so I make my way to the centre. This town (and others) have several side streets newly paved with setts, whose disposition reminds me of familial urban landscape. In the middle of a couple of squares stand enormous trees to provide restoring shade. People from the countryside dressed in white robes gather here to do business or wait for work. On one side, rows of camels file orderly away, minutes before the esplanade is swarmed by mourners in traditional costumes attending a funeral with lavish processional baldachins.

I start the visit from the main stelae field where the Rome obelisk towers in all its glory after its restitution in 2005 following an absence dating from the 1930’s. There was much merriment over this epochal event, given the obelisk’s symbolic value in relation to Axum ancient civilisation, that has made this town an outstanding centre on the religious as well as the cultural level. I pass to the adjoining archaeological museum, which points out interesting connections between the reign of Axum and other neighbouring and distant kingdoms. A surprising stele inscribed in Ge’ez, Greek and south Arabian witnesses to the accomplishments of a great civilisation that people in the West are little aware of.

Despite the scorching sun, I make my way up the slope to Kaleb’s tomb. A charming girl comes to me and in an enchanting whisper she offers a metal cross. Her traits are pure, her profile perfect. Her black hair is plaited in close-knit braids clinging to her head. Another girl joins us, also 13 years old, of a different type of beauty that almost, if possible, outshines the first. She’s carrying her little brother, aged one, tied in a pouch on her back. I am speechless at their good looks and surprised at their correct English. 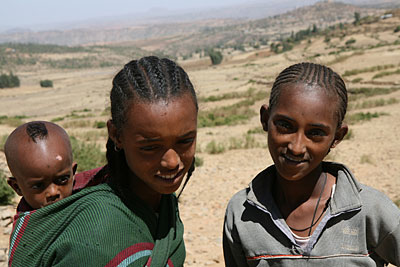 Another natural highlight of this country are birds, whose shapes and plumage are so new to me, that even the most ordinary species are a joy for the eyes. The commonest grey pigeon has delicate patterns drawn around its body. A swift bird flying by looked all black until it passed near and I saw incredible metallic blue reflections on its belly. A last specimen had an deep orange bill and this colour matched the plumage on the lower part of its body.

I finished off the exploration of Axum by bike on my second day in town. I rode to the market, not at its best that day, and the famous church compound that is said to host the ark of the covenant. The fact was nothing very appealing or even evocative to me, so I decided not to pay for an exorbitant ticket.

I then cycled out of town to the ruins of the palace of Saba and a minor stelae field. At the horizon a distant granite cliff offered more attractions so I pushed ahead to see those too. When I neared the spot, I was approached by two panting boys who had sighted me from their field of tomatoes. Leaving the bike, I let them guide me across a slope scattered which impressive stones of reddish granite. Yellow haystacks, of a shape so perfect that they looked like rounded boulders of polished rock, stood out for their anomalous colour.

The children point out to a huge boulder on whose side the outline of a lion seems to be engraved, a prodigy that is explained through an edifying legend. We then get to an ancient quarry and an unfinished obelisk. However hampered by my bag, I rush back down behind the kids hopping on the scattered stones and skirting the large boulders. If I make haste, I may hope to leave to Adigrat and, who knows, Debre Damo.

Due to the evil effects of tourism, in Axum I also came across a few people who apply a policy of double pricing to foreigners. The amount is always irrelevant, but the principle is wrong and annoying, so I opposed it whenever I found it. Only non professional people can consider tourists as outsiders and value them only for the money they bring, rather than as individuals to provide good services to at the right price.

Lamentably, the very Africa Hotel manager quoted an excursion to Debre Damo at € 120, and when I said I was not even considering such an offer, he indentified me as “the one staying in the room with shared bathroom”. A big mistake on his behalf, that made me give him the cold shoulder by replying with a dry good-bye. The message came home to him – and I stick to my principles and lifestyle which allows me to break through the narrow cage that many people live their lives in.