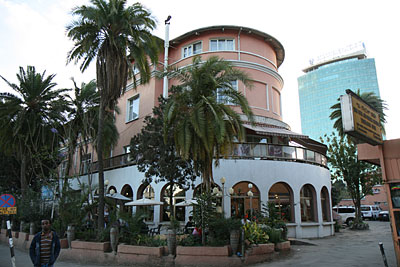 I spent the last day in Addis Ababa, thus buckling the loop I’d started here. The itinerary I followed was also ideally rounded off in that I devoted my time in the capital to two activities that completed my trip: I visited the ethnological museum that reviews the ways life as are lived in the various regions of the whole country, not just the northern states that I visited; and I had a comprehensive walk around the town, looking out for the 20th century legacy that is most prominent than anywhere else.

In Debre Damo a deacon was showing me his collection of coins and my eyes popped when I caught glimpse of one that looked somehow familiar. I don’t know how exactly, because I’d never before held a coin like that in my hands, but maybe the writing and the lettering appealed to me. It was an old two lira Italian coin bearing the insignia of the regime, i.e. the eagle standing on the fasces surrounded by a crown of laurel. On its head side, the effigy of Vittorio Emanuele III, King and Emperor and the date 1940, or XVIII of the Fascist Era. When the boy saw my face brighten up, he wanted to give it to me and I offered him some loose change in exchange.

Those were the times of the popular song Facetta nera, composed to extol the military campaign against Abyssinia and justify it as a liberating mission of the slave black girl that stood for her whole people. The couplets pledged to bring her back to the homeland and have her parade in front of Il Duce, give her a new flag and a black shirt.

Slavery and feudal law were actually among the positive innovations, along with a tremendous building drive in the infrastructure and towns. 3,000 km of roads were built, often on very challenging ground, and the towns started to be organised centres, provided with fine functional buildings. The investment was certainly huge and the colonial effort, for all the violence and racial disrespect it was rooted in, left behind a sketch of urban planning that has been probably unequalled ever since.

At home I dug up an old book from the garret. It was the last volume of the guidebooks to Italy and its territories by the Italian Touring Club, devoted to Italian East Africa, dating 1938. Written in a celebratory style, but nonetheless the fruit of accurate research by a team of specialists in various fields, it described a country that had recently been annexed to the Empire and was set to become the destination of tourists, or more probably settlers and businessmen.

I compared the town-planning scheme for Addis Abeba with what I was able to see of its partial or surviving realisation, 70 years on. It started with the railway station to Djibuti, itself built by the French at the turn of the century. It stands as an elegant airy building, alienated from the rest of the town that is inspired to different styles. The scheme provided for pulling it down and rebuilding it further afield.

From there started the main avenue, that was designed to be lined by tall buildings and others of decreasing height further off on either side. There are still many constructions with porches and decorative elements typical of the period, such as a mosaic on a wall signed by a ceramic factory based in Asmara. A banister inside another building had a wooden geometrical pattern that represented a stylised M, the initial of Italy’s dictator. It was so unmistakably 1940’s that I had the impression of going up the stairs of a run-down copy of the Inland Revenue offices in my town.

Other sites that were developed are the Grande Mercato Indigeno, called Merkato to this day, and the Piazza, sided by interesting buildings with pastel coloured façades and profiles. 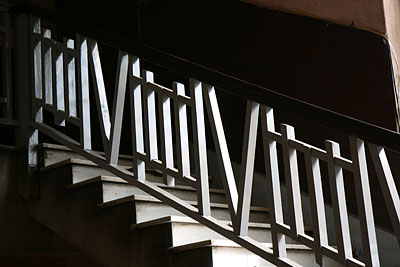 At the museum there was a photographic exhibition picturing atrocious scenes of the reprisal following the attempt on general Graziani’s life in 1937. The crack-down was pitiless and thousands of innocent people perished in the three-day iron-fisted repression carried out over the whole capital, and later at Debre Libanos. At home I was further shocked by reading about the events at Amba Aradam in 1939. This word has now entered the Italian language to mean a mess, but when we pronounce it we should be saddened by the ruthless cruelty that was deployed against the resistance at this very place. And that too few know anything about.

Tempted as I may be, I won’t justify anything by evoking similar, or worse occasions when other colonial powers smothered revolts in blood in their respective territories. but simply asked myself “Was it really necessary?” I wish only man could only learn from history and his mistakes, but I’m asking for too much for the news tell us the exact opposite.