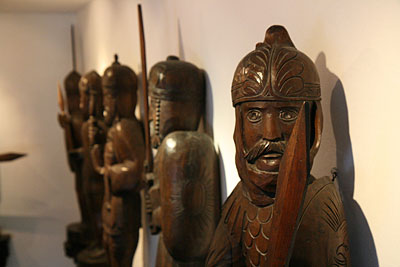 The Australian guy I met in the dorm told me he’d just begun his tour of the world. He was only at his second country after Greece, but had a worryingly clear idea of his proposed zigzagging across a couple of continents. This crazy rambling would leave him very little time for each country, for example his greed to “see” as many places as possible made him devote only four days to Italy. However, this much authorised him to tick it off as a visited country.

I’ve never understood people who want to do the tour of the world, especially in this way. For me the philosophy of travel does not reside in visiting the highest possible number of countries with the aim of impressing people. It is discovering civilisations and their history, cultures and their ways of living, places and their nature – and this requires time and concentration.

A political boundary is often meaningless in terms of the above factors. But a more significant argument in favour of my point of view is that some countries are in fact city states or little more (take the Vatican City as the extreme example, but the Emirates are not much more), while others cover huge swathes of a continent (such as Russia, Canada and China). Why should they weigh the same in the list of visited places?

Don’t ask me how many countries I have been to: I don’t keep track and if I started enumerating, you’d be probably disappointed at the repetitions. Also, I’ve always resisted the temptation of drawing one of those maps where you colour the states that you’ve been to. To me, it’s utterly nonsensical. Why should India become blue all of a sudden after, say, you’ve only had your passport stamped and maybe visited just one city? This is no step towards knowing the complexity of any country.

I need at least a three-week long plunge into a culture to start understanding some of its ways – and I’m talking from the traveller’s standpoint only. I often regret not being able to see the places I visit under different circumstances or at a different time of year, just to see them in different meteorological conditions. And I wonder how my perception would change if, instead of visiting for a limited amount of time, I stayed as a resident, integrating myself into the local life.

I am sorry I’m not even giving Bulgaria its own right by staying only a week here. The Australian, on the other hand, said he missed going to Skopje because of a train problem. When I asked him what interesting things he meant to have seen there, he was puzzled, but said it would have been one country more.

The answer came as no surprise and it strengthened my stance: I will stay a one-country-at-a-time type of traveller.