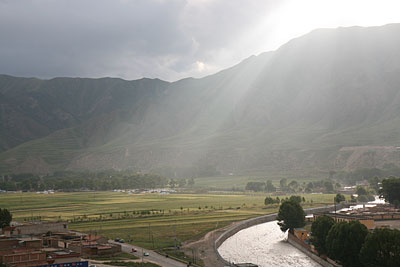 Fleeing from Lanzhou, I first reached the town of Linxia, crossed by a large tributary of the Yellow River, with equally limy waters. Again, the river bank is lined with a row of unattractive modern buildings, quite orderly now that they are still in good repair, but a far cry from my expectations of the old town look. In between my two buses I stroll along the main street and watch the interesting presence of the Muslim Hui around the mosque and in the market. The women wear a peculiar lilac hat in the form of a fez. On the road to here, scores of Chinese-style mosques scattered across the charming Gansu countryside were a clear sign that Muslims lived in the area.

My next movement takes me to Xiahe, seat of the famed Labrang Buddhist monastery. I find a guesthouse which is a pleasant place to stay as much as its landlord is a disagreeable person to deal with.

The town develops around the extensive monastery that occupies its centre. This is really a remarkable compound made up of various buildings surrounded by an impressive long wall fitted with prayer wheels. The pilgrims as well as the faithful walk along it in the morning, spinning the wheels.

At one side of the settlement, you find the overly commercial Chinese town consisting of mock Tibetan-style buildings sprung up in the recent years since the locality was launched as a tourist attraction. It is clear that the place is being developed as a hub of religious tourism for the province. The monastery is being renovated to boost its appeal. On the other end of the town lies the Tibetan settlement. Thus, Xiahe is inhabited by three ethnicities, the Tibetans, the Han and the Hui.

You can visit the imposing buildings of the monastery by joining a guided tour. It is young monk who leads us around, providing us with information that is unfortunately not always crystal-clear. He sprinkles his serious talk with gags that he is the only one to chuckle at, but his laugh is contagious and if I don’t understand the jokes he cracks, at least I find myself smiling at his good mood. It somehow reminds me of the Dalai Lama, who also comes out with witticisms in the midst of the most serious talk. This monastery is also equipped with a printing press, which has however none of the charm of Dege in Sichuan.

Ambling forward to the Tibetan village, I find a temple where the monks are holding a prayer. The first ones I see of this sect, they wear a robe of two colours, red and white, have a black hat and boots on their feet. Just as the monks are assembled in the hall with a gaping door, a few worshippers keep walking around the hall. An old lady objects to my taking pictures and get so upset as to threaten me with what looks like a raised middle finger. Maybe her gesture didn’t really mean vulgarity, I concede, but who knows? I get the message and stop photographing – at least within her visual field.

If at first I felt I was repeating myself after the beautiful monasteries of Sichuan, still my visit to Xiahe is an occasion to reflect on the spread of Tibetan culture down to the foothills of the plateau. Tibetan culture is found in several provinces outside Tibet and lives side by side with Chinese culture. The Lama Temple in Beijing is enough to show the long-standing relationship between their respective spheres of influence.

I discussed this difficult relationship with a tour guide from Xining. Chinese people flock to this place of worship, some driven by an authentic religious feeling. Still, the Chinese government officially supports atheism and pictures the spiritual head of Tibetan Buddhism as a rogue conspiring against national interests. How can Chinese nationals come to terms with this dichotomy?

My informant, who is a post-graduate student in Tibetan culture, holds a very balanced view. He is not against the people, whom he judges with benevolence. After all, it is not their fault if they are fed distorted news and are the targeted victims of counter-information campaigns. 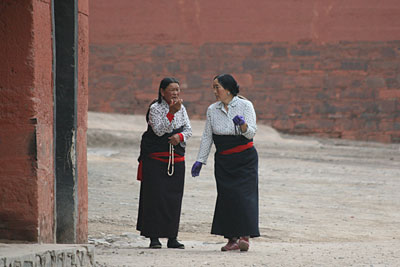 However, he blames the authorities for taking deliberate steps aiming at diluting the Tibetan culture in areas historically populated by this ethnicity. For instance, the Qinhai provincial governor recently issued a decree whereby schooling would be henceforth provided in Mandarin rather than Tibetan. But people protested vehemently, and the unrest was such that the governor was forced to come back on his decision.

The cultural stakes conceal geostrategic and economic implications. The man mentions a Chinese mining company that started the extraction of ores in Qinghai displacing residents in order to keep them in the dark about the real scope of the enterprise. The upshot is that no compensation is paid and no profits are distribuited.

The relationship is patently tense. The Tibetans are very proud of their culture and will not accept to be stamped down, still they have to accept that the Chinese hold the whip hand. The cohabitation between the Chinese and the Tibetans seems to move along a delicate balance of strength.