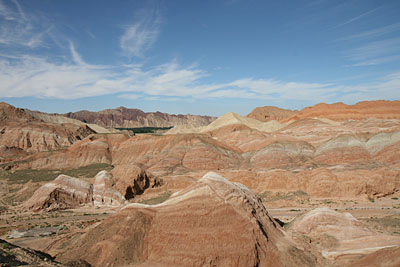 I was walking out of the bus station to board my coach when a man with hyped-up ways came up to me. His looks were funny and he kept touching my arm while I did my best to recoil from his fingers without showing too much. He must have taken me for an immigration official, because he practically wanted to do an interview on work opportunities abroad and immigration procedures, as well. However, I just had time to act in the role of improvised travel agent and answer his questions about flight duration, route and fare to . Then, pointing to my bus, I crept away with the excuse of its imminent departure.

The bleak landscape that we crossed on the first leg of the journey was for the most part high mountain grasslands with hardly any settlements. That day, in the gloomy weather, they looked all the more desolate. We crossed a mountain pass through a tunnel at the lofty altitude of , then started our descent to the Hexi corridor. A pale sun pierced the layer of clouds, and patches of bright yellow cheered up the prairies when endless carpets of colza flowers made an appearance. They seemed to give out their own light.

In Zhangye the heat and humidity were intense, but at least the weather was sunny, therefore perfect for a visit to the Danxia mountains. Before alighting from the bus I met two tourists who I took for Chinese, but were in fact from . We got a hotel room together and shared a taxi to our destination which is about  out of town.

It was by sheer chance that I had got word of this extraordinary place, which is not mentioned in the poor coverage that my guidebook gives of the western provinces. Before leaving for this journey, in fact, a friend sent me a chain email presentation with photos of beautiful sceneries around the world. A few excellent images portrayed a place in whose name rang a bell. I later established that it already lay on my proposed itinerary.

I hadn’t realised, but Danxia is an official tourist attraction, listed among the 12 that this county has to offer. This means that it is on the tourist track with all that entails: Chinese tourists, an entrance fee, and the impression of going to a regulated exhibit rather than walking freely in nature. However, by the time we got there the crowds were more than acceptable. The school group, all wearing the same purple cap, had almost wound up their scampering around and their din was subsiding before they finally embarked on a fleet of buses and left the place in relative quiet – for good.

I felt really rewarded by this extraordinary place. The shapes and colours of the mountains were so special that I did not tire of looking. Streaks of different shades follow the slopes and highlight every fold of the relief as if it were a cloth‌ dyed in bright natural colours. I was speechless. My gaze was lured by the magic of this kaleidoscope into following the stripes, getting lost in the distance and then coming back near again to discover new details in the design as if I was seeing them for the first time. 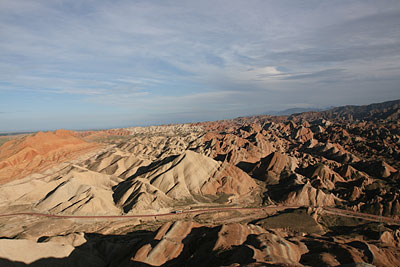 The first viewpoint has several landings from where you can direct your gaze in every direction and it is so articulated that I did not realise this was not all. There are more vantage points that are reached by a shuttle bus.

The second had a long flight of steps starting where the mountains seemed to be aglow with an inner fire. Crossing a footbridge, you can climb to the top of a hill offering a beautiful panorama: on one side the bare mountains look as if there had been painted by an invisible hand; on the other, verdant maize fields are the antithesis of the barren environment opposite.

By the time we reached the third point the colour palette was highlighted by the setting sun and I marvelled again at this spectacle of nature that seemed so unreal.