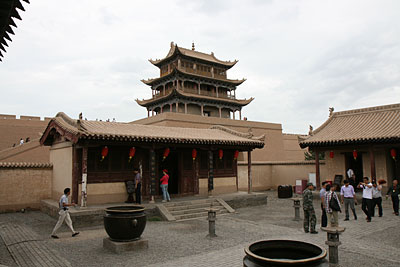 Visiting Jiayuguan Fort I found it easy to forget the noise of other tourists, even those who were led around by obnoxious guides using voice amplifiers. After all, the place is so big that the crowds disperse over vast spaces. It was also easy to forget an initially disappointing cloudy weather. On the contrary, I found that the dull sky added the special charm of a forlorn place to this former outpost of the Chinese empire.

The fort is so uniquely fascinating that it was also quite possible to forget the exorbitant admission fee. Terrible value for money, if you judge by the captions written in such poor English as to be hardly intelligible, apart from laughable. In any case, most explanations are no work of great scholarship: they often provide such trifling details as the dimensions of rooms.

For all that, Jiayuguan Changlou really is a special place. The power of the frontier that was is still palpable in the air, and you truly have the impression of being at the end of something. Here, where the Hexi corridor narrows down between two mountain ranges, was the most obvious place to end the Great Wall. By this decision, this passage was therefore transformed into the end and the mouth of , the place where the imperial civilisation came to an abrupt end and gave way to the Protectorate of the Western Regions. Outside the fortification lay the central Asian wilderness.

Built as a barrier to invaders from the west, it fell into disrepair over time and was only recently restored to its former glory. Now its imposing beauty is a gem in the middle of the barren landscape.

Travelling from Zhangye to Jiayuguan this morning, I could see the Qilian and the Beishan mountains on either side of the plain. Vast as it was, it did not look like a corridor at all. The flat plain bristled with electric posts and was crossed by an intense traffic of goods trains. These long snakes of up to 30 wagons travelled to and fro behind their little white head that pulled along the rest of the body, almost lost in the vastness of the scene.

I looked out of the outer wall of the fort. The weather was changing and rays of the sun drew moving patches of light over the mountains, falling from spots of blue in the sky. This unexpected improvement presented me with a new scene painted in vibrant colours. As long as it was cloudy, the scenery was in unison with the outpost atmosphere. Now, lit by the shy sunlight, it was a grand landscape.

I am contented. I turn my back to the fort and face the chimneys that stand on the outskirts of town. Several old-style industrial plants spurt out dirty smoke in the air as if nothing were the matter. 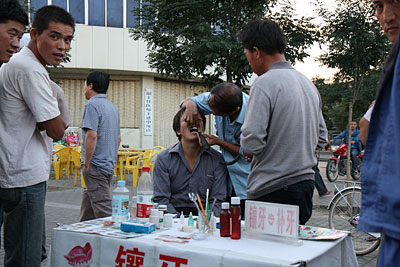 Late afternoon: Jianyuguan, in spite of the hour, is still steeped in bright sunlight. I have moved west considerably still keeping time, the only official one for the whole country. Isn’t this another expression of the capital’s neglect towards the periphery?

I walk along the street market where vegetables are sold, and various types of bread, some of which look as dry as the desert around, herbs, cakes made of superposed layers of soft dough sprinkled with sesame seeds. A group of people is assembled around someone sitting. All eyes are riveted on his mouth: he is the patient of a street dentist who is wielding a pair of pliers in front of his open eyes. Everyone is stretching their neck in order not to miss a single passage of the operation. Now the dentist assembles the parts of a drill powered by a portable battery and starts grinding. Most, but not the patient, will regret it is not an extraction. When I show some interest and take out my camera, the crowd readily pulls apart to let me have a full view of the scene.