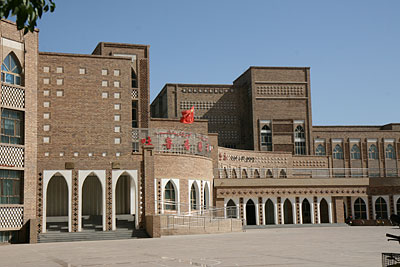 The night bus is about to start its 12 hour long desert crossing. This passage will mark my entrance into Xinjian from where I have been travelling all along, practically since the beginning of my trip. The bus has been standing in the sun all day and the air-conditioning is helpless in front of the heat that has built up. The railings are so hot that I cannot keep my hand on them. For about half an hour I lie paralysed on the short berth that does not allow my legs to stretch fully. The crossed-out ticket is still between my fingers and I watch it, unable to make any decision or movement, as if that was not my hand. Dripping with sweat, I simply exert self-control.

When the temperature cools down to an acceptable level, I am at ease to review the scenes prior to departure at the bus station. That ratty driver who bossed passengers around and refused to let me have access to the boot again; the two little dogs that attracted my attention because the white poodle’s hair was dyed pink on the head and on the tail. I saw them both enter this oven-like prison carried in a box by their girl master.

My fellow passengers got on the bus carrying flimsy plastic bags full of junk food. It is usual for the Chinese to store up on these items before a journey of some import. It is sausages wrapped in red plastic, that once munched into give out a hideous odour of pork. In reality, they must contain a bigger proportion of preservatives if they are to face a months-long shelf life without refrigeration. Another staple are chicken paws (complete with nails and yellow scaly skin), vacuum packed, a delicacy I have often been invited to taste. Then there is dofu that feels like plastic under your teeth, black chocolate biscuits with colouring poured in with a particularly heavy hand. The cakes are sold in puffed-up packages full of chemical air, when it is not altogether a shot of antioxidants in grains. The poor quality of is also in its food.

And who knows if they do not use these inferior ingredients in the restaurants too, where I thought I was eating fresh food? Tonight I have not had dinner, but I refuse to eat anything like this. My water supply would not have seen me through to the end of the journey, but at a checkpoint there is a policemen-run booth and I buy some from an officer in uniform. Private initiative has saved me. 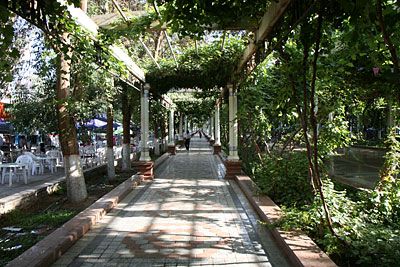 This journey will the modern replica of the caravan crossing of the desert in the old days. Accustomed as they were, even the merchants who plied this route on a routinely basis did not embark on an epic journey without apprehension. The Mogao caves was the place where protection was invoked before the start, or thanks given for those arriving from the opposite direction.

At I was at Turpan, dropped at a crossroad. A taxi drives me to a beautiful hotel that spares a shared room for travellers. I meet the other Taiwanese occupant who will be my unofficial travel companion for many days to come. She is travelling on the from the Chinese perspective. Her reference is not Marco Polo who travelled towards the east, but the Buddhist pilgrim Xuanzang who journeyed to the west in the 6th century in search of sacred texts.