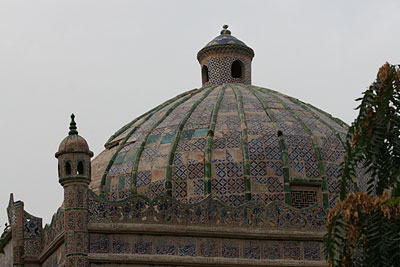 Before leaving Kashgar it is imperative that I arrange the journey from Xinjiang to by the deadline of my flight out. Although the nearly will make a very long journey by land, I will travel by train. I have a good memory of my last trip back to two years ago which made me feel nostalgic even before leaving. Whichever means of transport, the end of August is a critical period because of the school rush. In fact, the direct train is already fully booked and I am obliged to break up the journey in two legs changing at .

Yarkand lies nearly 4 hours away across the torrid desert. The road has to be protected by a trench, or else give in to sweeping sandstorms and unforgiving desert conditions. In Yarkand the sky has a strange glaring light as if the air were saturated with desert dust. Haotian and I find a double bedroom in a good hotel, but my friend informs me that we are going to be three in the night. The girl is going to join us. I have doubts about how we shall cope with the space, but the beds are indeed quite big. As to the hotel, in they do not care how many people occupy a room once it is sold.

We have a late spicy lunch, watch a film, then when the temperature is acceptable we go out to the mosque. The cemetery behind it is interesting: simple Muslim tombs are aligned in a dusty field shaded by trees. They are like one another, with hardly any distinction between the deceased apart from a simple inscription one some tumuli.

Next to the graceful mausoleum covered with ancient tiles an old man is watering the sapling he has just planted next to a tomb. He calls me and shows me the dates on the plaque signifying this is his parents’ tomb. The water he has poured into the hollow around the plant has made the soil darker, giving a hope of life to the tree that will grow among the dead. Surely this is not a place for the deceased, but for the survivors who need to keep the memory alive and even bring new life to contrast the ravages of death. He asks me to take a photo as if he also wanted to be remembered.

At one end of the graveyard there is the mazar, a shrine all built in bricks. In its enclosure a dead tree raises its bare branches towards the sky and a pole is hung with tattered funeral banners of various faded colours. A fortune teller and a beggar are waiting for visitors to give them alms in exchange for a blessing.

Few people are conversant with the Chinese language, and even Haotian feels a foreigner. I chuckle thinking of yesterday’s scene when he bought some yogurt that was handed to him in a plastic bag. He wanted a cup to drink it out of, but the woman just sent him off grumbling something in an unknown language. Haotian’s baffled expression was very funny indeed. 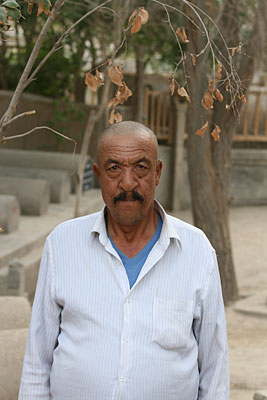 The girl arrives pm. They want to go out for dinner, but I feel sleepy. I only hear them come back at an undefined hour which I later learned was . They have met some people at the food stall and listened to their music. Our bus to Hotan is at so I have time for a second walk while they are still fast asleep after their night out.

At the market I see the half carcass of a cow lying on the pavement just butchered and being carved for chops of meat to be sold at the stall next to it. The meat hangs on the hooks and is not a pleasant sight after breakfast and, above all, next to the animal of origin. I turn around and on the opposite pavement a dying calf with his throat slit open is twitching in the last contractions of agony. Its paws are fastened together and its muzzle is tied shut.  When the butcher ascertains death, he pulls out a sharp knife, whets the blade with a sharpening tool and sets about removing the hide. It is shocking to see the poor animal to be cut into chunks of meat, but even more to observe the unhygienic conditions in which this abattoir scene is taking place.