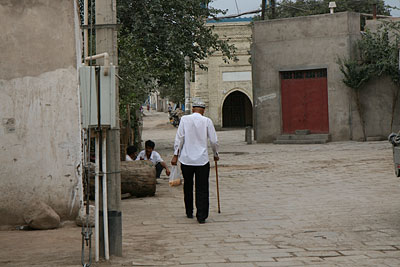 I was dumped at a bus station way before I expected I would arrive. The hour was indefinable. I was only afraid to find out exactly how much time would still have to pass until the start of the day. Some taxi drivers droned around me. Someone said it was 4 but even so, it didn’t make sense to get a hotel – I thought. Then I saw a vague glare in the sky, and I suspected I had been given Xinjiang time. My watch confirmed it was already nearly 7 o’clock.

The bus station opened at 8.30, and I found that the bus to Bayanbulaq only left in the evening. If I took that bus, it would be another long uncomfortable day without a base, but more importantly I would not enjoy the spectacular road across the Tian Shan mountains. The only choice was hitchhiking for the 250 km long stretch.

Before anything, I visited the old town and I had a pleasant surprise. In spite of there being no outstanding monuments, it was an orderly large district of low houses separated by ancient paved streets. There was an intact rural character about it that I had not found so clearly in any other Xinjiang town.

At the crossroads just outside the centre, a first car stopped, but when I said Bayanbulaq the man grumbled something about rainy weather and drove away. Half an hour later I found a car going to my destination. The price was agreed upon and we set off. From the very first minutes, the man’s driving turned out to be a nightmare. He maintained a breakneck speed and engaged in dangerous overtaking. When it was not him, the drivers coming in the opposite direction saw to keeping the level of adrenaline high in my blood.

The mountains were nevertheless marvellous. As we raced towards them, we got astonishing views of rugged peaks, colourful rocks, and distant green valleys where the river flowed. After crossing a first ridge, we penetrated into a region of higher peaks and followed a road with incredible sights over soaring summits and deep valleys. Only the curves made our pace slightly slower, but it was still exaggerated for that kind of road.

We overtook a minibus at full throttle, and the boys made victorious signs to the other passengers. Worryingly, it was turning into a race on the highway. When we stopped at the waterfall I realised it was one family group and we all took photos together. Later, we halted again. In the a large meadow the driver and his friend walked off and disappeared behind a bush. I thought they were going to relieve themselves, when they beckoned me to join them. It looked rather suspicious and I ignored their invitation. The boys, though, insisted I should join the adults.

I took a wide curve to see from behind what they were doing and it seemed they were eating something, but when I crouched down with them I saw a long slim pipe which they were filling with what they named a “Xinjiang speciality”. The greenish paste was covered by shredded tobacco leaves and lighted. Only one puff of this smoke was enough for them to get high. I turned down their offer for a try, and asked myself how this was going to affect the driving. Surely it would be calmer, but what about reflexes? 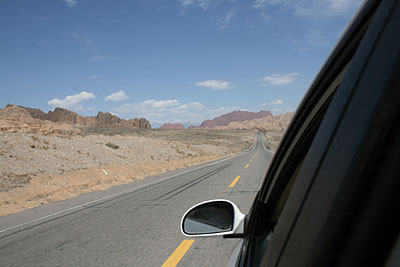 The effect of the dope manifested itself in a need for repeated stops: one at a beautiful lake surrounded by pine-tree forests, one for eating delicious melon and bread - the mellow juice coupled perfectly with the salty bread slightly flavoured by the onion sprinkled on the crust. We made more leisurely stops at a place where some Uyghur tourists offered me tomatoes and bread, and others before the pass and after the tunnel. Now it was like going on an excursion.

Finally, we got to the immense flat highland with no rocky peaks but immense prairies, where packs of horses ran in the wild and huge flocks of sheep grazed freely. The speed reached a new high on the monotonous straight road. I kept an eye on the rear-view mirror to check the driver’s state. His eyes opened to little more than a crack. Maybe this impression was due to his facial features, but they were not distinctly Asian. I sensed he was about to fall asleep at the wheel and I decided it was up to me to spring into action before it was too late. I spoke to him and he reacted by opening the window to let fresh oxygen in. I was ready to pretext a stomach ache to get off the car, but would it be too late before I acted? We were only 30 km from Bayanbulaq, but they could be enough for a serious accident.