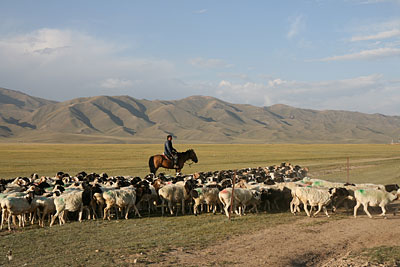 At last, shortly after Bayanbulaq came into sight, I was dropped at the central crossroads and I heaved a sigh of relief. All along the road there were various hotels. The original Mongolian settlement spread out behind this row of buildings towards the hills on one side and the river on the other. It was all scattered over a vast area, itself lost in an incommensurable environment. The town did not seem to hold any secrets and, after the dramatic scenery we had passed through, this immense valley looked boring with no rocky peaks. I nearly thought about leaving straight away, but I bid my time and got a room.

And I was right, because Bayanbulaq turned out to be fantastic. It gradually swept me with a formidable sense of beauty, different from the striking mountain landscape of the first , but equally fascinating. I felt its magic in full force when I walked out to the grassland and the shadows on the undulating meadows painted a wonderful picture of tranquillity and immensity. A huge flock driven by a rider was getting near, and I observed the beautiful scene of the sheep squeezing through the meshes of the fence where the first animals had made a breakthrough, although any other passage would have been good for the purpose. Three children were playing with makeshift polystyrene rafts on the icy water of the stream.

It was getting increasingly chilly with the sunset, so I went back to the hotel soon after dinner. The establishment, in which only another guest was staying, was run by a couple from . The man had a jocular disposition, and I was glad he did because the woman, who acted as a manager, was always wearing a frown on her face. She seemed only interested  in peering into the accounts, sticking her nose into the ledger and cashing the bills – forgetting, as if by chance, to return the deposit for the key. On the contrary, he was a jack-of-all-trades and came to replace my broken door handle while chattering away light-heartedly. Was this nervousness not the result of a frustrating life?

In the morning I wrenched myself out of the fluffy quilt and set out for a hike. Although I had anticipated only a couple of hours, my walk took my whole morning. I first climbed to the hilltop to observe the immense panorama covered in grass with white and blue Mongolian tents below. Then I reached the entrance to the reserve, but could not force myself to buy the ticket and visit in a regulated way. I wanted to enjoy the freedom of nature, like the wild horses that I saw yesterday. So followed the river for a long way out. Occasional heavy vehicles and few tourist buses plied the road on the other bank; on my side it was wild nature. The water gurgled in the river while the cows grazed on its banks and forded it where it became shallow enough. On the horizon, at the end of limitless prairies dotted with wild flowers, snowy mountains appeared in a distant haze.

Here and there, a greener patch of grass was the sign that there was water underneath. I walked down to the point where a creek made such a big marshy inlet that I could not get round it. Back on the main road, I waited only one minute before a motorcycle with two riders picked me up, and I was asked to sit on the remaining portion of the saddle before we whizzed back to the village.