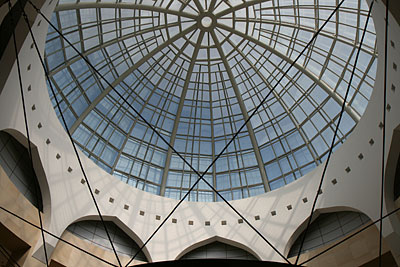 With only half a day to spend in Urumqi, I could hardly do justice to the city whose name I had once and again come across since my entrance into Xinjiang. I had seen written in the Uyghur Arabic script, in Chinese characters and in the domesticated Western variant. By all accounts, it is not a tourist destination, but since scarcity creates value, the few hours I devoted to it made me wish I had had more time to enjoy more probably inexistent attractions. What is important is that the few images I have kept of Urumqi will help me remember it as a positive experience.

The provincial museum was interesting. Like in other exhibits, the stress was put on the fact that the province of Xinjiang, however populated by sundry ethnic groups, belongs to the Chinese motherland. I noted a celebratory explanation that read word for word: “The people of all nationalities lived in harmony, learned from each other and founded the Chinese nation’s long history and magnificent culture with the people  all over the motherland together.” I wondered what the Uyghur themselves thought about this matter.

Urumqi’s famous market is called Er Dao Qiao. There you can breathe the Islamic atmosphere recreated by modern Orientalist architecture and the beautiful display of various goods. I bought excellent Turpan raisins and grabbed some food for my long train journey to Beijing.

It was time I headed to the railway station to change my reservation voucher for a real ticket. The ticket hall was literally packed with people. Every window had a minimum of 100 prospective passengers queuing under a rain of announcements that was coming down over their heads. It was always the same blaring messages that made the waiting even more exasperating.

After 40 minutes, with my time running out, my nerves were on edge. Only few people were still standing between me and the window, but a man was trying to jump the queue and get into the turnstile that was especially designed to prevent this sort of behaviour. Another passenger told him off badly, and he pretended to turn away but soon came back for a second attempt. When he tried to slide in again, it was the last straw. I grabbed him by the arm and pulled him out, feeling his big but flabby body give in to my jolt.

With a precious ticket in the hand I made it to the enormous waiting hall on the third floor where the whole trainload was waiting. They announced a one-hour delay, which became 4 at arrival and accordingly compressed my time in Lanzhou. With only one hour instead of five as per schedule, I made a dash to the Muslim street where all the shops were closed on a Friday afternoon. I had a dish of delicious lamian instead, the best souvenir one can get in this city.

There were two spoilt children in my compartment on the first train. As most families have an only child, these are always at the centre of their parents’ attention and grow into whimsical unbearable little creatures. These xiao huangdi, or little emperors, make a scene and whine for everything, but parents will always pamper them.

The second train was occupied mainly by students, who surely in their time had been spoilt children. Some had grown into self-centred teenagers, for example those two girls who strutted around as divas. Or the boy who spoke with his mother on the phone and took this self-complacent tone of voice. He the addressed me in English during the call just to boast of my presence – hardly any mature behaviour in 20-odd-year old people.

The train journey waw on the whole disappointing. I did not make any acquaintances, but spent the time on my own. The Chinese have a no frills-attitude to strangers. Very often people do not acknowledge your presence with a greeting and they do not take leave with a formal salutation. They can be very direct: you enter a shop and do what you have gone there for without ceremonies. However, the lack of a starting and ending point in social intercourse means that you can engage in a conversation with anybody without formalities. You can strike up acquaintances and build up a rudimentary network of guanxi that in due time may turn in useful. 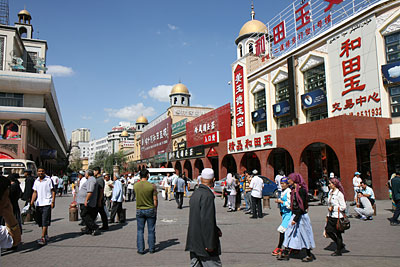 People are curious, but not usually afraid of being the object of this special interest. In some places I felt my soul pierced by prying eyes and reacted defensively staring back to mean that I had had  enough. I imagine a Chinese person would be indifferent to such attentions. People do not seem reticent to open up, because the information you receive and provide in petty talk may always turn to your advantage.

In Beijing it was pouring with rain. For the last night I stayed at a known hostel near Qianmen. Compared with the my first visit, I saw the rebuilt old Beijing all around with more benevolent eyes. Now I am used to China now and I don’t condemn the artificiality of this sort of places. I wound up my third China trip with a roast duck which was as memorable as yesterday’s lamian. Adieu, China.