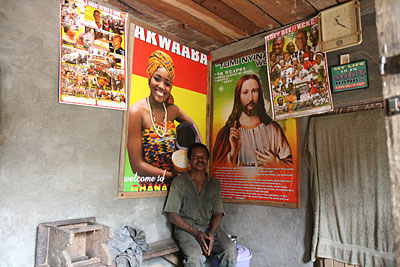 I boarded a trotro out of Ho to move toward the Togolese border crossing a charming hilly landscape with remnants of beautiful tropical forest. From Fume junction, extensive work was under way to upgrade the road. The Mountain Paradise Lodge, where I had envisaged staying, was too near the dust and the noise from the building site, so I went further to Amezofe, which sits higher on the hill, comfortably away from any annoyance. The only reminder of the roadwork was the bright cut in the hillside below where the white chalky rock showed amid the dark green vegetation.

Amedzofe lies between two peaks, one of which is a bare grassy knoll, and the other is occupied by the church preceded by a cement staircase. Some tall trees stick out here and there from among the sparse houses, and all around the vegetation is lush.

Down below, the market place is an empty space with an unsealed surface and only two lines of stalls face each other under a corrugated iron canopy. At its end on a lower level, the place hosts Amedzofe’s first citizen, a magnificent tree that many years of growth have turned into an authentic work of art. A few seats with elongated stone backs are planted firmly into the ground, and people relax here in the refreshing shade cast by the branches, exchanging a few words, or just staring into the void watching life go by.

There is also a tourist office, part of the eco-tourism project set up by an Ngo. The original employee received me, directed me to the guest house and gave me a tour of the village.

The next day I went on a hike to explore the surroundings. As soon as you leave the village, the vegetation becomes luxuriant, but patches of forest are constantly reclaimed by slash-and-burn agriculture to provide indispensable farming land. The cash crops here are coffee beans and cocoa, in addition to medicinal plants and herbs they use as natural remedies. I tried chewing quinine seeds that made my mouth twitch in disgust at the extremely bitter taste. It is still used as an effective treatment to malaria, the scourge of tropical Africa. Talking of which, plenty of mosquitos bit me last night when I was watching the cup of Africa semi-finals in which Ghana were playing. I let my guard down in the general excitement, but the score finally disappointed all the Ghanians, and I realised that the only thing I had earned were several red spots on my ankles and calves. Malaria is no joke: in a guesthouse dustbin I saw a medicine box with a menacing mosquito drawn on it. Even locals get down with it.

The waterfall didn’t have abundant water in the dry season, but it was still a nice sight and a challenging walk down the steep slope. I wound up my forest hike passing by the teachers’ training college and the school grounds.