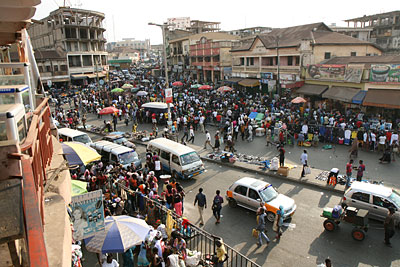 It was difficult to find accommodation in Koforidua, and I had to spend the night outside the town. The next day I set out to as early as possible. The beautiful road seemed to have been cut across pristine forests for long stretches. The driver had a penchant for stepping on it, but I felt more comfortable when speed bumps or other vehicles obliged him to slow down. Sadly, the road accident rate is staggeringly high.

In I was met by the indescribable chaos around the central market. The pavements are occupied by a continuous display of goods, such as shoes, clothes, household items, and what not. Passers-by have to invade the traffic lanes if they are to get around the obstruction of buyers and sellers. The traffic is paralysed, with the consequence that Kejitia is often impassable.

Some hawkers do without a proper display and content themselves with unfolding bales of clothes and putting the contents out for sale at knockout prices. Fashion clothes from overseas clearance sales or directly from Chinese factory outlets are advertised by the shouting vendors, their voices sometimes outstripped by the blaring amplification of street preachers.

If you’re hungry, food is not lacking, but again, the impression is one of improvisation. It seems that whoever wants to run a food joint can do so by just placing a roadside stand and offer cooked food or prepare it then and there.

Life seems harsher, dirtier, and more disorderly in the city that in the countryside. Some denizens like to show off their elegance sporting gaudy jewellery, ridiculous dresses, unnatural hairstyles, and take on a vulgar look compared to simple country folk. I feel a gulf opening between me and this lack of refinement.

The Presbyterian, Methodist and Catholic churches all occupy as many hill tops as if each had vied to conquer a position of pre-eminence. I chose to stay at the Presbyterian guesthouse.

I visited the small museum, and gained an insight into culture and their complicated rules that govern social life, especially those regarding inbreeding that provide for a ban on marriage within the clan. In the same precinct there are workshops, with potters, bronze smelters, batik dyers, but finally I had to leave this oasis of tranquillity and plung back into the hellish traffic, where the only consolation were the trees that lined the street.

The mythical sword that indicated the position of the ’s golden stool is still thrust in the ground, nowadays within the hospital grounds. The building is a modern structure, but motor hearses ready for funerals wait outside the precinct and remind patients that something can still go wrong. It can’t be an encouraging sight for those about to be admitted to the health establishment, and certainly it was not for me. The macabre rank was made more formidable by the grotesque setup of the more stylish vehicles with golden gables or other decorations in perfect bad taste. Others are simply former ambulances, which have the advantage of already being provided with a stretcher slide.

I averted my gaze, but a pungent stench of formaldehyde reached my nostrils from the morgue, and I was again reminded I was in the very presence of death. Characteristic as it might be, I was unable to bring myself round to snap a picture because somehow it seemed an ill-fated thing to do. For a moment I imagined having to face the nightmare of hospital. 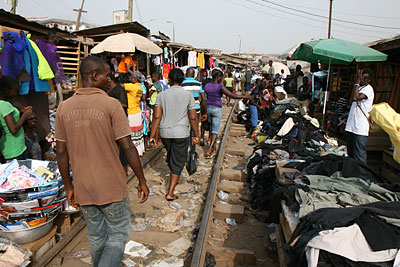 It took the market to heal me from this shocking experience. Monday is terribly busy after the weekend rest. It was so disorienting that I hesitated penetrating into the compound, but once inside the impression was altogether different. It is organised in an orderly fashion, and I enjoyed observing wax print fabrics, vegetable sellers, slipper makers, and yam roots being unloaded from a lorry. The immense area occupied by the stalls is sheltered under corrugated iron. All around, the old railway line is the only passageway for shoppers, the rest being invaded by sellers. It makes rather inconvenient walking because of the decrepit cross beams, but it is very original. Hausa sellers with their straw hats and white tunics add a note of exoticism to this already interesting place.