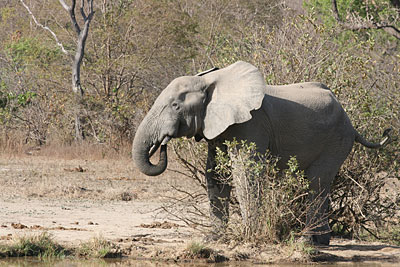 If you go from to Mole national park, in practice the only way is passing through Tamale, which means you have to double up part of the road. At least I managed to get the afternoon bus to Larabanga without staying one night in town. As I travelled north I noticed that the sky became clearer, the sun shonestronger, and the temperature went up.

Starting from Larabanga junction, the road becomes unsealed, and the red Metro Mass Transit bus gathers a good deal of the dust it stirs, and so do the passengers that it conveys. After a never-ending ride through the savannah past occasional villages made of round thatched huts, the road crosses two communities and finally touches Larabanga.

I put up at a guesthouse that offered simple rooms and sincere hospitality. All around was the lovely community straddling the trafficless road, away from the tourist resort at the park entrance. To reach the park I hired a bicycle and rode along the of dirt road. The outgoing ride was very pleasant in the first hours of the morning, but I had to offset the heat of the unforgiving sun on my return trip by pedalling fast enough to generate some breeze.

Before the walking tour started, I was prepared not to see any elephants. A French woman complained she had not sighted anything the previous day, and was about to join the jeep ride in hopes of better luck. However, the savannah landscape was already an interesting experience per se with beautiful trees and bare branches outlined against the sky. The predominant colours were the browns of the dry season when the heat is at its highest.

To our great excitement, we saw an elephant and stalked it until it joined other specimens at the pond. I could not take my eyes off the morning bath scene, when in turn the pachyderms sprayed themselves repeatedly with the trunk intake of mud and coated themselves with natural sunscreen and parasite repellent. Their dimensions made them look like prehistoric creatures, and their slow movements gave a slow motion effect. I was not sure what to make of the scout’s warning that the elephant is “the third fastest animal”, but decided to take that at face value. 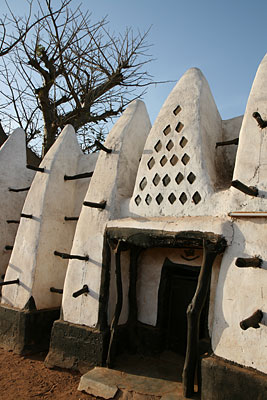 In the evening there was much expectation in the village because of the Cup of Africa finals. However, half an hour before the match was due to start the light went out, and the only working television set was the one next to the mobile network relay. Apart from the general disappointment, it was much quieter than the previous night, with no music and a starry sky undisturbed by street lighting. I slept for a few hours on the rooftop until it got too cold and went down into my room.

Larabanga is a Muslim village and has a small mosque built in mud with wooden poles serving as structural reinforcement that stick out of its whitewashed walls. An imposing tree reminds every visitor that this is for real.

I travelled to Tamale the next day and then on to the northern town of . If the temperature was already hot in Larabanga, it had not reached its highest value yet. The smothering heat questioned my plans: I didn’t feel up to embarking on any activity, walking on the hills, or taking more shared taxi rides. Besides, the market turned out to be rather disappointing, with no special feature that could stir my curiosity. After a look around the workshops where the characteristic straw baskets are finished with leather handles, and the new market, which looks much paltrier than the old, I called it a day and jumped on a southbound bus to .