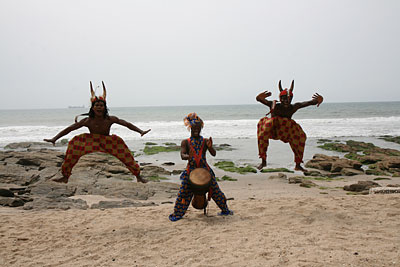 I rummaged in my backpack and extracted the scrap of paper on which I had noted the phone number, then looked for a public phone. I dialled, and Sally's mobile phone rang twice before she picked up. She and her boyfriend were at a funeral – not exactly as mourners, but as dancers. Yes, because funerals in Ghana are big social occasions for assembling near and far relatives, involving neighbours and establishing good relationships, but also for flaunting the family's possibilities which are supposed to be directly proportional to the lavishness of the ceremony. During these events traditional dances are often performed by professionals with a propitiatory and exorcizing meaning.

Sally had come to Ghana months earlier from Australia to take a course in African dancing, and met coach Alan there. At the end of this period, while the rest of her group took the way of return, she decided to stay longer, not just for the dancing. Since her motive was love, she braced herself for her first cohabitation experience and boldly moved into Alan's house. I met the couple on my way to Mole National Park and found them friendly. Sally, in particular, was cheerful and loved a good laugh. Upon parting she gave me her phone number and said she would be happy to put me up when I passed by Accra.

On the phone she gave me instructions to reach the district where they lived, but said they wouldn't be back before nine at night. In the meantime I could wait at a certain café along the street. So I extricated myself from the tangle of vehicles, passengers and hawkers occupying two adjoining bus stations and got on a jam-packed wreck that puffed along the busy thoroughfare out of the capital. As night fell we were moving toward a district that had a name of its own, but was more effectively referred to by a restaurant that everybody knew. When I got off the bus a power failure was under way, and the generators were droning hidden in the darkness; the place was lit exclusively by the headlights of passing vehicles. I ordered a drink at the café and read to kill time.

Sally finally turned up. On the way to their place she glibly recounted how the funeral had gone as if she were talking of the horseraces. It was pitch dark, and I had to find my footing on rough ground, but she knew every bump of the path by heart. The hang of the neighbourhood we were crossing didn't quite tally with my ideas. My guess was we were walking along humble buildings of one storey raised directly from the earth, whereas by virtue of logical deduction I had expected a proper residential district. In fact, when I met the couple they were staying at the comfortable (and quite expensive) park lodge, while I had opted for a more basic solution on offer in the native village. I had therefore imagined them as a rather demanding couple who were used to a certain level of comfort, maybe living in a penthouse with a view over the ocean. But penthouse it was not.

We squeezed through a dingy passage to emerge in a yard delimited by a cluster of houses. Alan's "flat" consisted of a single room divided in two by a curtain. On one side of it was the double bed and on the other the living-room area with a gas range and the couch, which was to serve as my bed. Sally insisted I take their bed, but I was adamant they should not give it up for me. In fact, the problem was not the bed, but all the rest, starting from the toilet, which was a block away and shared by I don't know how many others on the estate. I thought how brazen faced of her to have invited me to stay there. I just wanted the last night to pass quickly and go away as free as I had come, free to choose whatever rat-hole accommodation I wanted as long as it was by my own decision and didn't come as a cold shower like that. 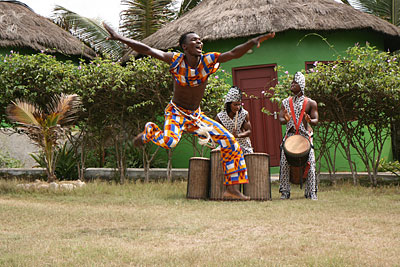 Sally was familiar with all the neighbours, but I felt the rift between me and their humble condition, expressed by their accusing or envious looks to us the whites, which Sally so carelessly took no notice of. Maybe I was only the outsider, but it seemed to me that my world and theirs would never come close to each other. I spent the morning with the dance group on the beach where they took photos for their website and then left, free to be myself again and to return home.