I went to Anshun by train. The duration of the journey didn’t exceed the waiting time in the hot temporary shed outside Guiyang train station while this is being finished, but this is no wonder in a country where travelling by train is as complicated as taking the plane. However, I was ready to put up with any inconvenience rather that go to the bus station again. Anshun looked like a friendly town. When I arrived the night market was under way, and there were plenty of noodle stands near the station. I was just spoilt for choice.

The next day I took a bet to visit Zhijin caves on a day trip. It is quite a distance from Anshun: by bus the journey requires a good 6 hours to Zhijin town, and then you still have to take a minibus for the last to the caves. This tourist attraction has been designed to receive large numbers of visitors, but the gigantic parking lot and the big visitors centre showed they were not running at full capacity. All were Chinese.

The caves were huge. I spent a long time walking underground, loosely following the tour guide who, like everywhere else in the world, just liked to point out to what the limestone formations reminded in the way of familiar objects or animals. The panels scattered along the path were rather more informative explaining interesting facts regarding the cave, but an apology for an English translation was only able to make me smile and fell short of reaching other goals.

I also found that the repeated signs prompting visitors to “Pay attention to safety” were rather entertaining, coexisting with electric cords let trail on the path, a short pole sticking out from the middle of a step on the ill-lit stairs, and especially an area, naturally wet with water oozing from the ceiling, paved with smooth tiles of the most slippery sort. Some signs used a poetically cryptic language: “I am fridility don’t touch me”, or attempted philosophical reasoning: “I being is your exist”. I was also amused by the sign, down in the depth of the cave, warning “Cigaretle contain tar. Smoking harm to stalactite”. But if smoking was prohibited inside the cave, once outside people were allowed to run wild and flick their cigarettes over the “Ash can”.

In the deepest point of the caves there were stands where photographers offered their services: pictures of visitors in front of a curtain of stalagmites. And there were even toilets, built amid a forest of stalactites. It was a town in miniature.

I took the bus out of Zhijin, crossed the beautiful countryside again, now in a clearer weather, and reached Anshun by 9. I was tired. The clean but humid room waited for me. In her offhand style the landlady popped a few fast-spoken questions to enquire about my movements. 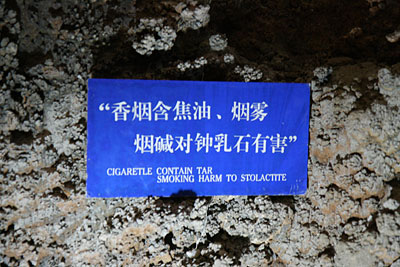 I spent some time on the pavement in front of the hotel chatting online on a free wi-fi network and watching people pass by. Then I bought a piece of cake from the confectioner opposite. I had trusted its looks, but it turned out to be a tasteless spongy texture. I should have known better because the man, when he came over and craned a prying neck to read out the text message I was writing, said he’d never learned from a master confectioner but had invented his own recipes by making experiments. He may not have been the best confectioner in town, but he was a hospitable man. When I passed the shop a little later his partner came out to hand me another sweet as a gift.