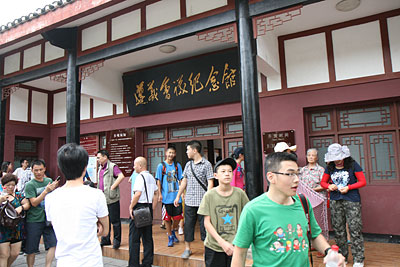 The last of my Chishui visits was , just at a short distance up the valley from where I slept. Once inside, I followed the trail to the two different valleys, not particularly impressive after the last days of hiking, but I could hardly get tired with admiring the lush vegetation, the tree ferns and red boulders that make up the riverbed. Besides, as the only visitor, I had the place all to myself.

I sat down for lunch at a restaurant in the village and had delicious bamboo sprouts, the staple of the region. Here they also make mats out of bamboo slats to spread over bed sheets for a fresh summer bed. I was tempted to buy one until I discovered how much these innocent-looking objects weigh, and without hesitation I brushed the notion aside. The restaurant boss was the most caring little woman who phoned the driver to make sure there would be a seat for me when bus passed by Jinsha.

I started the long ride to Zunyi, crossing mountainous regions battered by rain. We stopped at a roadside restaurant for a dinner break, and didn’t arrive until past ten at night. As I came out of the bus station a man accosted me and proposed accommodation. I followed him up the stairs of a nearby building to land on a platform that was indeed a rooftop, but looked like an elevated street with more buildings rising on either side of a central alley, which was in its turn lined by a few little shops.

I woke up late after a wriggly night and left the bag at the hotel. Zunyi is famous for being the theatre of a conference that marked the rise of Mao Zedong in the Communist leadership at the time of the Long March. I wasn’t so motivated to visit, but to my great surprise I found that they didn’t charge admission – a rare instance in where you are constantly milked by greedy local governments cashing in on the booming tourism industry. 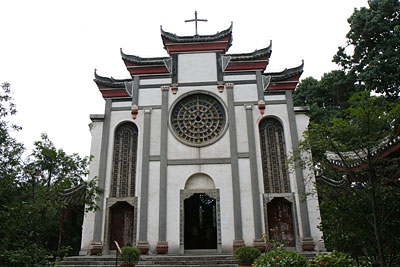 Upon presentation of my passport I was issued the free ticket, with the heading “Key national cultural protection unit. Nation patriotic education base”. Zunyi and the roads leading to it had struck me for an abundance of billboards with a red backdrop designed to remind the public that, in spite of the current scramble for development, this is indeed a country that feeds on Communist principles. And here I was at the place where crucial events took place, together with enthusiastic  Chinese tourists brushing up on the official version of their history books on site. The only conclusion I came to was how great and shamefaced the pretence has become nowadays.