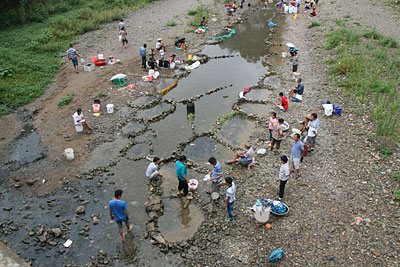 I went to Zhouxi to see another market. Under the bridge pools circled off with stones teemed with fish on sale. A trickle of water kept the poor things alive and those that didn’t gasp for air already floated belly up. The women sported a peculiar hairstyle with a chignon and a stylish wave of hair that came down elegantly to frame their face. Shiqiao, the tiny paper makers’ village, had underwent recent renovation. There were interesting houses with ears of yellow corn hanging from the rafters.

All was fine, but I needed something more adventurous to keep my interest up, like the trek from Xijiang to Paiyang about which I had no other information than its contradictory duration – depending on the source, it ranged between one and three days. When I asked the landlady, she was genuinely worried about my notion to walk all that distance and tried to talk me out of it. I reassured her with the promise I’d come back by the evening if it didn’t work out, but secretly I was determined to do my best to carry out my plan.

It was only on the bus that I started to gather more detailed information. A passengers who was familiar with the area gave me a list of the villages I’d have to pass, which I recorded together with their dialectal pronunciation on the back of my ticket. In Xijiang, though, I was to be confronted with a surprising repulsive sight. A huge parking lot preceded the entrance to the village, now turned into the big tourist attraction of the area, a perfect Chinese-style theme park. Coaches from cities as faraway as and a large number of private vehicles gave me a hint about the possible numbers visiting a once authentic place. I categorically refused to buy the expensive 120 Y ticket and find myself trapped in the throng convened at the must-see village.

Since there was no way to get through the gates without a ticket I was also barred from starting my trek in Xijiang. So I walked down the road to Kaijue, but by the time I got to that village it had started raining. It was just a drizzle at first, but it developed into a persistent rain and the heavily clouded sky left no hope about improvement. I stopped under a roof, slit open three rubbish bags and wrapped them round my legs, tying them at the ankles and tucking them into my trousers.

I trod on as far the village gate. There stood a boy on a scooter, also sheltering from the rain. He pointed the direction I should take saying it was a very short walk. He himself was from that other village, half populated by the Han and half by the Miao. I confidently started on a concrete path romantically winding its way among the paddies, but it ended in brambles. I had no other option than come back, always under the rain, and follow the road up the hill. I passed a group of houses where I asked for confirmation about my way, but after that last outpost of civilisation, there was nothing but a muddy road. I had missed the shortcut that justified that guy’s telling me it was a short distance.  Where was I heading now? 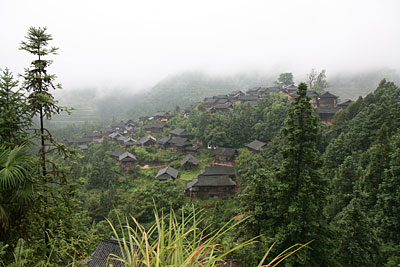 At the top of the hill gusts of wind were channelled into the pass and the rain fell violently sideways. Moving banks of fog drifted over the wooded landscape. Peering through the low clouds I caught glimpse of a group of houses, eerily coming and going out of sight, which might be the third village in my list. I took the bet and ambled down, happy to finally find human presence in the midst of all this bleakness. Three men were sitting on a trunk under a roof.

I had been inches from giving up: my landlady would have been happy, but I would have felt a loser. It was already , I had wasted many precious hours roaming aimlessly around, but maybe I was finally on the right way. The people asked me if I’d eaten, but I didn’t feel hungry in the least. I struggled to find some snacks in their shop that had less than the basics in stock, finally settling on two sachets of undefined sweet bread drops for a paltry 1 Y, too cheap to be any good.

I resumed my way to Paiyang. It was still intermittently raining, pouring and then drizzling, occasionally lulling, fogs constantly hovering  in the sky. The landscape was all water, from above in the form of rain and from below, in the flooded paddies. However, the sight of the meticulously tended terraced fields made me happy, and likewise observing details such as the pearls of rain on the rice blades. It was a rich palette of different shades of green, a complex geometry of watery vistas, and rain.

I passed the silversmiths’ village. Time was getting late, I dreamed of a dry bed and a book to read. I enquired tentatively, but the shopkeeper didn’t know of any accommodation available, so I plodded on. Some children pointed to a shortcut which I took until I got to a farmhouse with people gathered around a fire. I sat down with them and had some rest. The old woman wanted to show her traditional embroidered dress, then invited me to eat, but I still didn’t feel hungry and I had become convinced I should walk a little farther.

I was only an hour away from Paiyang when I judged I had had enough. The village looked beautiful, the houses, all made of wood, merged in perfect harmony with the landscape, no trace of concrete. As if my wishes had been guessed, a man riding a motorbike stopped by me and offered a lift to Paiyang, but I turned down explaining I didn’t want to betray my plan. In spite of the perfectly waterproof black plastic protection, my feet were drenched, I could feel water inside my boots splashing at every step, I wanted to rest, get dry, eat and sleep. My looks must have given me away. Before I asked for anything, the Miao man invited me to stay at his home and have dinner with his friends.

He’d just pop over to the village to get some beer, he said, I should wait for him there. In the half hour that it took him, I saw him ride to and fro over and over again, every time in the opposite direction and with a different passenger that he was taking somewhere. That man was really generous. But he hadn’t forgotten about me: every time he assured me he was going to get beer and would be right back. 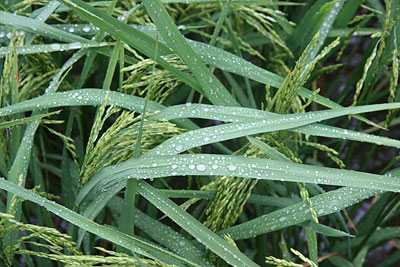 Eventually he came back, with no passenger. We left my bag in his half-finished house and went up the hill to have dinner with his friends. They brought a bracero with burning coal cakes next to which I warmed and dried my feet. The dish came, big pieces of goose simmering over the heat of another bracero. My chopsticks picked in turn a lump of fat, sometimes meat, or a chunk of thick skin, dunked it into the tremendously spicy pepper dip and took it mechanically to my lips. I was given a bottle of beer. An old man poured a glass of baijiu for me, the only sprit he liked and therefore thought I must like too. Repeated rounds of cigarettes were offered just as we were still eating the goose. I wished I had six hands to simultaneously handle all those things, eating, drinking, smoking, including staving off insistent offers of more baijiu while my cup was still half full. The finale to my trekking day across the Miao villages couldn’t have been more in tune.