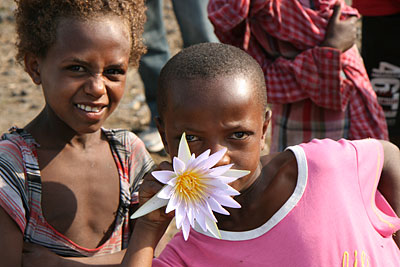 It was well into the night by the time I had cleared customs and was the holder of a 30-day tourist visa for unrestrained access to Ethiopia. I took a look at a map and felt overcome by distress. The three weeks that lay ahead of me seemed an eternity: the time to reach and visit the deep south surely wouldn't need to be that long? I conceded that that little ribbon of a road seemed flattened in time, distance and altitude, and that my mind was still anchored to European schedules. Things would look quite different once I was floating in the fuzzy undetermination of African time.

The noise resounding in the vast airport hall had already subsided by the time I emerged from arrivals. Sleeping bodies were lying on the floor or on rows of flimsily padded chairs. They were airport workers off their shift, local travellers in wait for an early morning flight, and even foreigners who had just arrived or were waiting for their departure. I too didn't go out in the middle of the night in search of a hotel I had failed to reserve. I lay down and fell into a slumber. It was only at 6 when the airport was waking up to a new busy day that I moved to the still calm first floor to spend the last couple of hours of sweet sleep.

I took a minibus to Piazza and then down to La Gare where I found my last time's Ras Hotel for good breakfast. In spite of this being my second coming to Ethiopia, I thought, Addis Ababa would be the only known place and the rest complete novelty. But even so big changes were under way in the capital from two years ago. The formerly trafficked avenue across from the station square had turned into a dusty building site in the hands of a Chinese company, its workers set to beat record times in the completion of the contract, welding by day and night iron rods into armatures for the mushroom-shaped pillars which would support the light railway. Not a good-looking cityscape, I judged, but at least an innovative project in a city whose traffic congestion is in need of urgent relief, especially on the Addis-Adama axis. I looked around and couldn't help but notice the contradiction between a state-of-the-art railway project under construction and the quality of ramshackle residential housing. Priorities are hard to set when everything has to be done.

It was well into the night by the time I had cleared customs and was the holder of a 30-day tourist visa for unrestrained access to Ethiopia.

I waded through mud in the area under the pillars. A pedestrian passage had not even been put in place and the disruptive building site had wreaked havoc on pre-existing precariousness. To my great discomfiture, I found that the former bus station was not there anymore and I was directed to Otobis Tera, at the other end of the messy town. A nightmarish move into the chaos of the public transport system ensued which started at an informal bus-stop where no minibus that passed by bore the destination written on the front – but even if they had, it would have been unintelligible Amharic script. The minibus conductor sometimes leaned out to call out the terminus name while a crowd of avid would-be passengers flocked around in hopes of securing a cramped seat on board. The rare minibuses going to the bus terminal were invariably full.
Finally I got into talk with a young man who as every day had come to Mercato to sell 1000 eggs in two now empty hampers. He candidly said it was only 15 minutes' walk to the station, and I had been waiting helplessly for an hour! I prompted him to show me the way and we walked together until I finally saw him part from me in the direction of his hen farm with the bamboo pole slung across his shoulders. A little further the familiar bus station was in front of my eyes, every bit as dismal as last time.