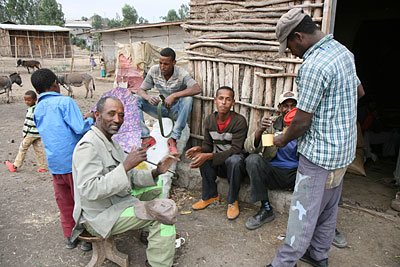 We had barely driven a dozen kilometres and the countryside had returned to the archetypal rural landscape, Addis Ababa long forgotten after its last concrete buildings. My eyes were mesmerised by the changing scenery and were greedy to see it unfolf behind the window panes, but my neighbour started to talk. He meant to be friendly and broached general topics of conversation; when he had got more familiar, he asked me personal questions about religion. I was pretty sure he was Muslim, given that his name was Hussayn, so had a guess with the certainty of hitting the mark, but he smiled and said he used to be one. He had converted to Orthodox Christianity after marrying his wife, a choice that had resulted in family tensions. He was nevertheless a convinced believer and was engaged in a personal project of translating the Bible into his native Silté language.

The area I was heading to was in fact inhabited by the Gurage people, of which the Silté represent the main Eastern subgroup. Being Muslims, as opposed to Christians like most other Gurage, they obtained the recognition of an independent ethnic identity and the establishment of a special administrative zone for themselves.

By the time I arrived in Melka the weekly market had already finished. The few people left on the place were the grain merchants, their attendants busy shovelling barley and sand-fine teff into heavy sacks. Someone invited me to a glass of local beer, and I sat down with them outside a shack that functioned as a bar. A girl brought hollow calabashes filled with a murky liquid over which floated undefinable dark specks. I remembered a previous experience in which I had drunk too much home-brewed beer with devastating effects on my stomach. The bacterial charge was too high to withstand, even for a hardy and trained body like mine. I thought it wise not to take any risks on the first day so in turns I sipped some of the liquid and poured some away when nobody was watching. 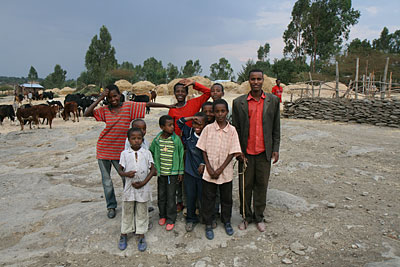 On the opposite bank of the dry river I could see people returning home after a day's work. Some were driving their cattle back to the pen, others still fanning the wheat. Big clouds were gathering in the sky, and the rumble of thunder announced drops of rain that in the night-time turned into a heavy downpour battering the tin roof with a deafening din.

The hotel restaurant was complemented by a roadside butchery bearing the two usual red crosses painted on the panes. Since it was not a fasting day the landlord was surprised when I ordered a vegetarian shiro but had to give in to the evidence that they had run out of meat so in practice there was no choice. As a consolation he sat down at my table to talk and was so kind as to offer a much needed change of sheets. However, when he realised I had already taken out my sleeping bag he concluded there was no need for that and he left me with bed linen that had long stories to tell.