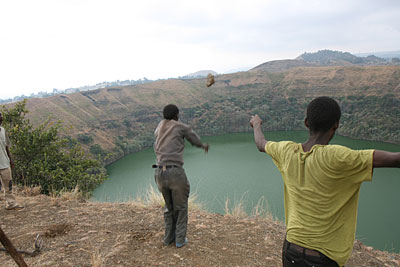 From Butajira to the south it's the Silté's land. I took a van going to Kibet, the first of their towns, with the intention of reaching the weird crater lake called Are Shetan. On the minibus everybody knew where the white man was going, and in spite of me making arrangements with the conductor from the start, they all seemed to have taken my case to heart and to be willing to give a helping hand. The man next to me shouted to the driver I should be dropped at the turning; on my other side a young fellow was trying to tell a long story in incomprehensible gestures that I took to be his personal sign language. He nearly made me feel pity for his handicap until he also shouted something to the driver. As we approached the junction all expressed words of encouragement as if my enterprise was going to be a perilous one.

From the junction I walked up to a point where the dirt road forked, and asked two women who were intent on agricultural work. With a smile they pointed to the right, and I started a climb until I found myself rather unexpectedly at the edge of the impressive volcano crater. There was also a higher peak, but that was obviously not my place, because 120 m below me the greenish waters already formed the perfectly round lake. I stood in contemplation of this inspiring scene. A ray of sun pierced the clouds and made the water shimmer with an incredibly vivid emerald colour. I waited until the surface was all lit up by the sun, but the best moment had definitely been when the darker colour of the waters contrasted with the lighter vein of acid green.

The hillside was teeming with men at work dwarfed by the distance, but I could hear their voices clearly. A team of young men swept down the slope on their way to an early lunch brandishing shovels and spades. As they stood on the rim, they gouged big stones out of the soil with their tools and competed at hurling them into the lake. It was an act of defiance to the legend that whatever stone is thrown into the lake will be spat back by the devil spirit that lives underneath. The stones disappeared from view in the enormous chasm and no missile was slung out of the depths. The abyss concealed even the splash and the rings making me feel like a tiny body suspended over the immensity of a vacuum basin. I walked all around the rim, with an ear turned to the countryside alive with the crow of cockerels, the cries of people, the bleat of sheep, all faceless noises coming from the vast landscape of fields and sparse farmhouses. 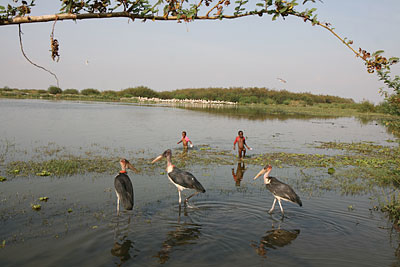 Around the bus station chat dealers were selling bundles of sprigs from enormous bunches wrapped in ensete leaves and tied up with vegetable rope in the shape of gigantic funnels. Men carefully selected the freshest leaves, the ones that can be chewed and swallowed without leaving a dry tough residue in the mouth, – then placed them into a wrap in order to stop the drying of the precious sap.

In the matter of an hour I reached Ziway which lies in the Rift Valley on the shore of the eponymous lake. The temperature was higher, the vegetation different with majestic umbrellas of acacia trees scattered across the yellow savannah. By the pier three boats were filling up with people returning to their homes on the lake islands. The blue of the water and the yellow of the reeds faded gradually into the distance. Pelicans and marabou storks vied for the waste that the fishermen sorting the catch threw at them over their shoulders.