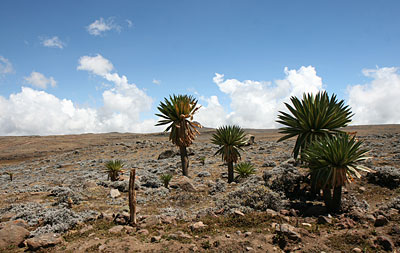 In spite of getting up before daybreak, I took ages to leave Goba. I stood at the bus station waiting from the time the sun had not risen yet, with chilly air that made long sleeves imperative, until when the mid-morning glare was filling the sky and the heat was grilling my neck. It was an endless and distressing wait, during which I was the companion of many other prospective passengers to Dola Mena. As usual, the group of people nervously rushed up to occasional vehicles that got into the station yard only to discover from a disdainful conductor – there is inexplicably never a sign on the front of the bus – that the destination was of no interest. In this chaos a man took the initiative of compiling a useless list of would-be passengers, someone started selling tickets that were later refunded, finally a bus station official made another list that gave some hope to everybody as if being registered materialised the elusive bus although I was certain it got us nowhere further. There was just no bus. Finally a sudden rush of people out of the compound directed my attention to the place where a minibus was being assailed by the throng. I don't know how, but I made a dash and managed to get in.

Just outside the town the road becomes a track and climbs on the mountain with an increasingly wider view over the incredible plateau all cultivated with cereals. At the top we were on the Sanetti plateau, the high altitude flatland of unimaginable dimensions at over 4,000 m of elevation. There are no trees, only sparse giant lobelias and a carpet of silver green bushes. Wildlife is present in the form of the red fox, various rodents and other creatures. The road crosses the highland for kilometres and kilometres on end, and when it reaches the opposite edge it plunges down the Harenna escarpment. This is covered in low vegetation, which in turn develops into a real forest with contorted branches hanging with fringes of moss.

I cross the Sanetti Plateau by public transport and discover what a fantastic place it is at a hefty 4000 m of altitude.

We halted at Reera, and I saw a nice hotel consisting of eight straw huts. This Muslim village had a colourful mosque and two restaurants that offer only three dishes: bread with honey, bread with spinach and breadcrumbs soaked in butter and honey. I felt in love with the place and decided to stay for the night.

In the afternoon, as I walked up to the forest, it started to rain and I took shelter in a peasant's hut. Ahmed with his two wives stood staring at me while the ground endured the pounding of the rain, then of the hail. The fire was smouldering in the centre of the hut sending wafts of smoke up in the air that were magically absorbed by the thatch and released outside like a milky aura that envelopes the conical roof. I took out my camera and showed them some shots just to fill the silence in the lack of other forms of communication. Little Bilal was sucking his mother's breast. When the rain stopped I returned to Reera by a shortcut across the fields. The night was lit by full moonlight.

In the morning I wanted to see the monkeys jumping in the trees and got a lift on a lorry bound for the tourist lodge, but the vegetation was so thick that I couldn't see much. Back in Reera I had to wait a long time, the only bus that came along was probably already full and didn't stop. However, the man who had helped me in the morning came back and rescued me again. Sitting in the front of the lorry with a fantastic view on the road, I made my way up the hairpin bents to the Sanetti Plateau which I enjoyed under a different light. He was a good driver on the whole, apart from when he forgot about the state of the road and landed into a pothole at excessive speed sending me up in the air. Luckily I was gripping the handle firmly, or I'd certainly have got hurt. I took in the marvel of this extraordinary landscape and didn't miss one single moment. The vegetation of beautiful shapes and remarkable colours left me speechless. It was of unique beauty: the palette of colours encompassed the clay red of the road, the blue of the sky and white clouds. There was no impurity in the air at 4000 m and only over the edge could I see some haze sandwiched between a layer of high altitude clouds and the low-lying plains. 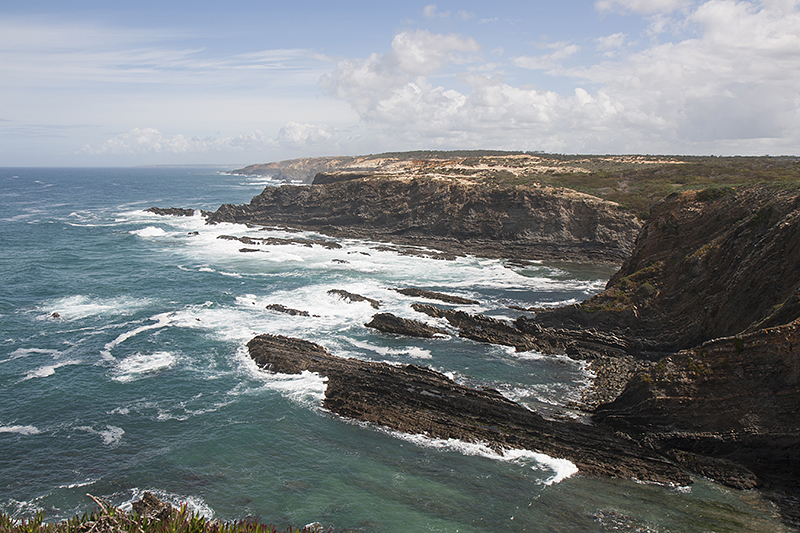