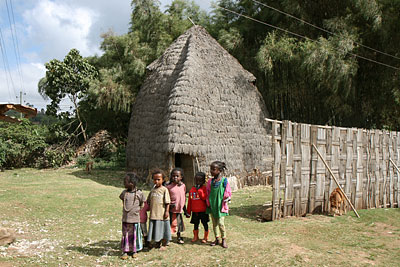 The mountain village of Dorze has a beautiful Thursday market, and on the day of my visit it was particularly lively as Lent was approaching.

Dorze, when I arrived, didn't seem to be anything particular. The market would not start until a couple of hours later, but some boys were poised to jump on the only tourist around – me – and force themselves upon him as guides. I fended them off and walked up the main road passing the characteristic huts until I saw an original hotel of straw huts where I was invited to sit down and have tea. After a chat, I reckoned it was time for the market. I was discreetly followed by one of the hotel boys who took me to the weaving cooperative and then the potters' workshop. In both places I was offered items at a preposterous price and when I left without making a purchase, the potter lady cursed the boy so vehemently that she disgraced herself for her gross tactlessness.

A little further there was an open air abattoir: many heads of cattle had been slaughtered on the meadow and puddles of blood were clogging in the sun. A priest had come to choose his cuts. A butcher was skinning a cow, and other men pounded the chest open with the powerful blows of an axe. They pulled out the intestines and wrenched out of the carcass a stomach still filled with the cud of the bovine's last meal. The intestines are given to dogs; liver, lungs and stomach are eaten by people; the hide is used to make mats; the meat is sold on tarpaulin or ensete leaves spread on the grass. 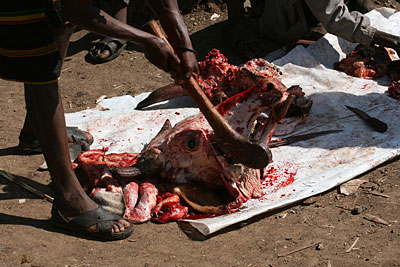 The market was then in full swing and terribly exciting. The place was teeming with life, every corner was busy, tremendously interesting to watch. Goods of one kind were displayed together; among all, the patches of dazzling white cotton wool caught, and then blinded the eyes of the beholder. When I had inspected every nook and cranny, I went for the bus which ground its way down to Arba Minch. 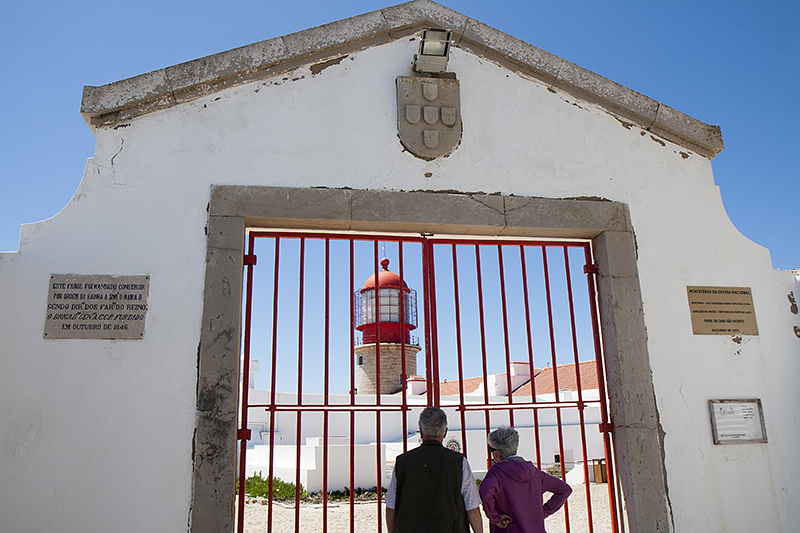