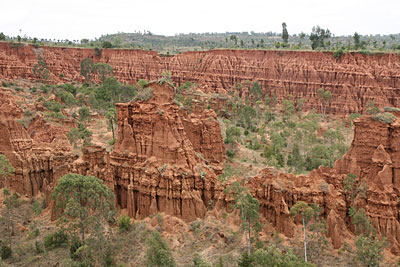 The road to Karat Konso was partly surfaced and partly unsealed, but didn't take very long. It's a distance of only 90 km, so starting in the morning I was there by noon. I got a room, had lunch, and hired a motorbike to see the villages. Gesargio was the first one, a very neat settlement like every other inhabited by the Konso, but its highlight are the strange formations created by the erosion of an earth bank. Here the children attack whatever visitor ventures into their territory. I was knocked off by their sheer number and couldn't be left one moment alone to admire the place in peace.

The second village was much calmer, and I was able to appreciate its amazing structure perched on top of a hill. Low stone walls delimit concentric circles up to the highest point, a footpath runs between neat fences made of branches. Ogival gates of sturdier boughs let people into the yards, usually enclosing a sheepfold and other household facilities. The thatching on every roof is very compact and looks like a layer of snow after an abundant snowfall that rounds every edge and angle. A granary and other communal structures are other features of these villages that also point to how life is lived in these traditional communities. My guide gushed about village life and could hardly find words to describe its joys and benefits.

The Konso live in fascinating villages built on hilltops with natural materials. Their farmlands are as beautiful as perfectly tended gardens.

The villagers I met were smiling and welcoming, a far cry from the children of Gesargio who probably see too much tourism. To be true, I did notice that my appearance brought about a stir even in the calm hamlet. People came out to the threshold of their enclosure to pretend doing daily chores in the hope of being considered good subjects for photos and thus earn a tip. In fact, they were very discreet and not at all pushy, but the snap didn't feel authentic so I didn't take any. One man was an exception: he came towards me with a spindle in his hand, hardly heeding the task was supposed to be attending to. When he saw me uninterested in portraying him, he hurried after me asking for a baksheesh of 3 birrs. I was already out of the walls when he launched an all-out sales gimmick, putting the price down to 2 birrs. I smiled at this improvised clearance sale of his personal image, but again I didn't make concessions to posed shots.

The third village had a tremendous view over the vast panorama of the Rift Valley, too beautiful to be true. It may have been a painted backdrop, but I was there and felt like crying out for joy. Village life, however hard for the people concerned, seemed perfectly idyllic. It couldn't have changed much with modernity, as there is little advancement out of traditional ways: no electric power, use of natural materials for the huts (apart from very few tin roofs), cattle breeding and farming as occupation. Some say a change can be noticed in the clothes, now bought ready-made rather than home spun and woven, but the traditional dress is still widely used. 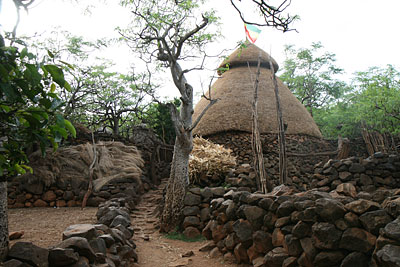 Back in town I walked around the bus station and sat down with a fellow passenger of this morning to eat bread with tea. I was looking forward to a good shower after the dusty motorbike rides, but the surprise was that the hotel had a faulty water installation and there was not a trickle of water out of the spout. I normally wouldn't dream of complaining for this in Africa, but since I was charged a foreigner price, higher than what the locals pay for the same thing, I took my revenge and let them know that a more profitable customer also requires higher standards. Did they think they had found the goose that lays the golden eggs? No, no, I played the fussy customer until I realised that nothing could be done and left the room for a much better one in the hotel opposite - after claiming for a refund, of course.