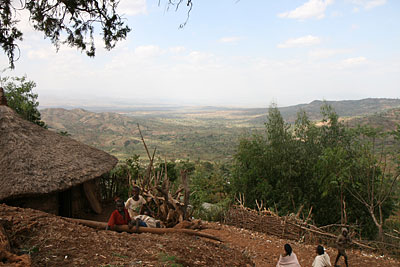 Fasha market, considered to be the best of the Konso, is held on Saturdays, and I was lucky to be still in the area. As it takes place in the afternoon, I had time to spare, so from the roundabout where the three roads meet I walked to a little market held on the outskirts of town. There was essentially meat on sale, the last that the Orthodox are allowed to eat before the long Lenten fast preceding Easter. Children greedily sucked strips of raw meat or pulled the marrow out of smashed jawbones with their very teeth.

I proceeded to Fasha by motorbike, but there I could see no sign of the market yet. A group of teenagers came to welcome me and all of a sudden I found myself surrounded by a number of young people, all curious to meet the stranger who had arrived at their village unaccompanied. Out of the group one voice rang out clear. He was not the oldest or the tallest, but the more enterprising and had a tremendous desire to give me a warm welcome. He spoke with a voice that had not broken yet, his child's body shorter than the others. He earnestly wanted to give me a good reception and show me around as a host does with a revered guest. After a short village tour, as there was not much going on yet, I said I could sit in the shade and read a book until the time when we went around the market together.

Fasha is the most important of the Konso markets, and I was witness to what a lively place a dull village square can turn into.

I sat on a trunk, but the children were still around me. I played guessing ages, but embarrassed my protector by reckoning he was 8, whereas he was already 13. I went for lunch with my little friend, after he had chased all the people who he deemed annoying. After that, there was still time, so we went to his family's bar, where I ensconced on a mat and drank honey beer.

That boy's mother died when he was little, and now he lived with his father, brother and grandmother. On market day they anticipated a lot of punters and they had a problem with a generator to fix. I could hear tinkering with the engine and a spanner, but from time to time the boy emerged from the storehouse to ask me if I was all right. "No problem?", his endearing high-pitched voice asked. "No problem!", I replied with a smile, while my eyes crossed his grandmother's and we exchanged an amused look at the boy's incredibly responsible attitude.

He was very sorry for not being able to take me around the market, but he could not flinch from his duty towards his family. When I went out to the open, the marketplace had filled to the unimaginable. It was teeming with human beings, the sellers displaying their goods on a piece of cloth on the ground; the buyers enquiring and bargaining here and there. There was hardly any space left between the rows of sellers. Sometimes I was pushed to one side and swayed, but didn't know where to put my legs for fear of crushing someone's limbs or goods. From one end of the place, where goats were weighed and sold, to the other, where tailors sowed colourful hems to the white skirts, the offer of this market covered all the daily needs of the Konso.

At one point I heard my name called out. I turned around to find my friend who had come to see how I was doing. I said I was very impressed by that beautiful market, but within myself added I had been even more impressed by his friendliness. I beckoned to him to wait and rummaged in my bag. I handed him a silver coloured pen that he admired speechless. He turned it in his hands as if it was a treasure to hoard and walked away. When he had gone some distance he turned around and looked in my direction. He found my eyes already pointing towards him and my arm waving my last goodbye. He smiled and also waved goodbye.