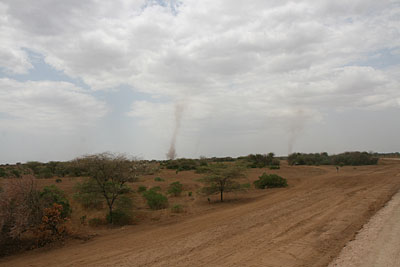 I slept at the mission on a bed protected by mosquito nets. It was a good, albeit hot and short, night. At 5 I was already stealthily leaving the house in hopes of getting a car at the usual early morning time. The priest, who was sleeping out in the back of a pickup, overheard my steps and woke up. I told him not to worry about me; if I didn't find a vehicle, I would come back and stay another night. In the darkness I groped my way towards the crossroads. I was walking abreast of two boys and a cart pulled by a donkey. They unloaded the jerry cans at a hotel and invited me to have a seat in the yard. I hoped I could have some breakfast, but a man said no food or drinks were available and kept on sweeping the floor. The day broke and a flight of yellow sparrows came to peck for crumbles. To kill the time I helped empty the jerry cans in the hollows at the base of each tree and saw the earth greedily absorb the water. Later the heat would dry every trace of humidity on the surface of the soil.

Barring the heavyweight lorries going to the roadwork site, no vehicles were passing and the hours wore on. I walked back to the army checkpoint, and sat to chat with the soldier on duty until an officer asked me to leave. I went to a food joint for breakfast and spread the word I was looking for a vehicle to Turmi. Some boys seemed to take concern, but my hope knew ups and downs. Someone assured a lorry would be coming soon, but my Africa savvy told me not to take anything for granted.

I finally succeed in finding a lift out of Omorate and move on to see a beautiful Hamer market, but it’s not a comfy journey!

Then a boy came up who seemed to more helpful than the others. In spite of his young age and the morning hour, his breath already smelled of alcohol. I could have expected the others to take advantage of my situation of need, but this one seemed well meaning. For prudence I played the calm card, declaring I wasn't desperate to leave today and that I could spend another night in Omorate, whereas in fact the exact opposite was true because it was market day in Turmi and I was dying to see it. But in my heart of hearts, I was preparing myself to bid farewell to my plan and really stay another night in this prison of a town, out of which escape was virtually impossible.

A tourist car came, I was looked at as if I was yet another interesting indigenous tribesman, then left as quickly as it had appeared. But that boy said a car was about to leave, and we rushed to the checkpoint. A few minutes' running in that heat were enough to dry out my throat, but the prospect was hopeful. There was indeed a truck, although the driver said there was no place in the cabin, but could accept me to stand in the back. I nodded in agreement, climbed into the truck. I rummaged into my wallet and threw out a small banknote to the boys who threw themselves on it. 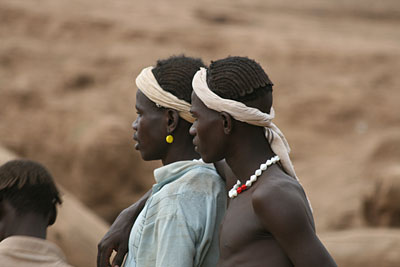 Immediately we hit the road I found myself in the rumbling din of the metal tipper, a large empty space in which I could only stand. It was a big empty space, except for a dead sparrow and a live cockerel with tied paws. I had to hold fast to the edge if I didn't want to go bashing against the sides. My travel companion was gasping for air, the red hot metal sheet probably starting to grill its flesh. I took pity and wanted to give it some water to drink. Keeping a precarious balance, I reached for my bottle and poured some into the lid, but the bird was scared by my proximity. I imagined I could at least sprinkle the water over its feathers; sliding off them it formed a little muddy puddle out of which the cockerel finally dipped its bill.

In the distance giant dust whirlwinds blew up in the air. We were heading in the opposite direction defying the undulating surface of the road that was more insidious than potholes as it limited the speed down to a crawl. I had become an expert in keeping my balance in the jostling motion and sometimes I leaned out to cross the surprised look of workers or lorry drivers. I covered my head with a scarf but the fierce sun tanned my forearms for two hours. 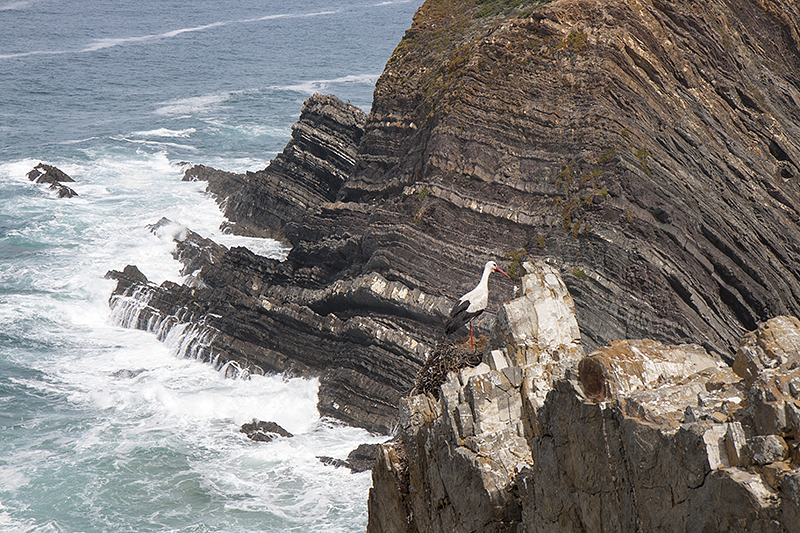