Contrary to all expectations, I got to Turmi in time for the market. On two contiguous market places a number of Hamer people convened from neighbouring villages offered or bought goods. Half of the sellers were seated on the sandy ground in the shade, others had a proper stall under a rickety canopy. If I imagined I had seen enough of natives, well, the Hamer really managed to make my eyes pop out of their sockets again. They were fantastic, especially the women, whose attire and hairstyle were extraordinarily outlandish. A goatskin hanging loosely from their hips serves as a skirt and is decorated with strings of seashells and beads. The reddish clay mixed with butter that impregnates their braids shines in the sun and gives a modern appearance to a look which is in all likelihood atavistic.

Two boys offered to take me to a village to watch tribal dancing, but I turned them down. When a child later accosted me to offer the same thing I accepted, and we set off on a track out of Turmi. Our departure had not passed unnoticed: the first two boys couldn't stand being outclassed by their junior. We were caught up with, and the child was bullied into letting them work. I refused to talk to them and walked on. The boy, who hid in a bush, reappeared a bit further, but the two didn't give in and returned riding a motorbike. They scared the child away and threatened to call the police if I insisted to go alone. Again I turned a deaf ear and walked on, now alone because the child had been chased away. At least they were exasperated by my silence and they left me in peace.

Further on I saw a local resting on a fallen truck. It was not difficult to guess he was as drunk as a lord – alcohol is a scourge for many indigenous people who spend their empty days swilling booze. This man was so loaded that I couldn't count much on him for showing me the way, but rather it was I who had to lend him a helping hand. Once he tripped on a stone and fell flat to the ground, I assisted him to get back on foot, and he managed to lurch on as far as the village.

I get to Turmi just in time see the beautiful weekly Hamer market, then have a special encounter.

As I approached the first hut a young woman beaconed to me to go inside. I hesitated at intruding into the enclosure, but she urged me to squeeze into the opening giving access to the hut. The airy inner space was delimited by a grid of reeds; the fire was smouldering. The woman sat down with stretched legs breast-feeding her baby. It was a sweet intimate scene, and she asked me if I wanted take a photo. More than earlier I felt I was trespassing into her intimacy.

Usually, portrait photos are conceded for a fee and some tourists complain of the hassle, but in the end they do some bargaining, stump up a few birrs and collect their photos. Once the shot is stored in their memory card, they leave and forget whose face that was. However, in this case things were completely different: I had been received as a guest, and the woman, at heart, was asking me for help. I could never expect that by entering that hut I would encounter harsh reality so closely. The woman specified she was poor, but words were superfluous. With 10 birrs, she explained, she would be able to buy a certain quantity of grain. I suddenly saw the photo-for-money scheme under a new light: photo for food.

When I asked her to change a banknote for me, she placed the baby into my arms and turned around to rummage in a box. With my white face suddenly simpering down at him, the baby put on a baffled expression, but didn't cry. I had not only penetrated their home, but was now entrusted with a baby in my arms. Few people, I thought, would ever do that with a stranger, and even among my friends it was only Adnan who gave me his 15-day old son Adam to cradle on my first visit. 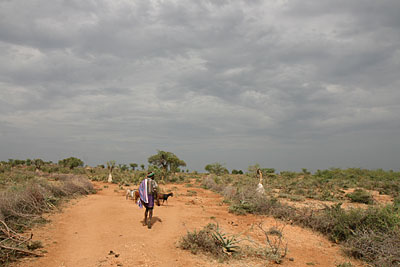 Out of the blue the child guide made an appearance. I have no idea how he was able to track me down in the hut, but it was needless to ask him because we had no common language. Anyhow, it was time we left, there was no dancing going on in any case. As I scrambled out of the hut, inexplicably my eyes filled with tears and I let myself vent out the overflow of emotion as I walked alongside the child on the dry riverbed back to Turmi. Maybe this time it was him who deemed it useless to ask me for an explanation that he wouldn't have been able to understand.