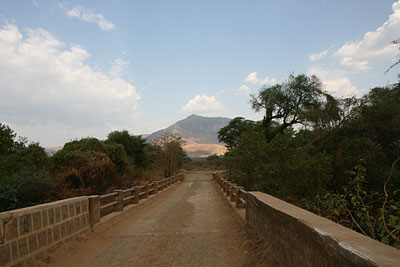 The truck that carried crates of soft drinks and beer took me and other passengers from the only crossroads around which Turmi revolves. We were all making our way to Key Afar or the villages along the way.
Periodically we were instructed to duck our heads under the tarpaulin as if the police didn't know that every lorry that carries goods also carries a human cargo. If only passenger vehicles were to be depended on, there would be many victims fallen on the roads due to excess waiting. As we approached a village I could see large numbers of people walking on the verge of the road in the same direction, which was a clear indicator that a market was going to be held. We took in a few more passengers, among whom a man with a fatty recalcitrant goat that had to be heaved and tipped over into the back of the lorry.

On the spur of the moment I decided to stop and have a look round. There was a cattle market with mostly Banna people, and another large place with consumer goods. I met Shigo and we walked round together. Under a leafy tree a large group was sitting drinking beer brewed from cereal, served in calabashes; nearby, they sold candid white butter and honey. I was surprised to see that Chinese-made fabric and other items like coffee cups interpreted the local taste so well that they came customised with Ethiopian patterns and symbols – I imagined it must have happened through the business flair of Chinese businessmen. The relationship between China and Africa is an ambivalent one: many complain that the invasion of cheap goods is de facto thwarting the rise of local industry and taking a heavy toll on traditional craftsmanship. Besides, cheap Chinese goods in Africa come in such low quality that buyers realise it is never good value for their money, but often they do not have a choice for lack of financial means.

I get to Jinka, which was supposed to be the farthest stop of my trip, but discoverer there is more exploration to do, and I find an original way to do it.

I jumped on a van bound for Jinka. It was only when I was about to arrive that I realised I had run out of banknotes. Luckily, I had a wad of one birr notes stacked away for small expenses and paid with that, which aroused the hilarity of a passenger. In Jinka the bank was already closed, so I had to get a hotel room on credit.

On the square I saw two white faces. They were two Spanish girls who had returned after working on a project with children and they were the first foreigners I talked to since the beginning of my trip. They had a sincere motherly attitude to the children, but it felt misplaced. This surely was not the way I'd seen local mothers bring up their children, who are not treated like inept creatures until they are well past 10 like in the West. Besides, the children seemed to know how to take advantage of the situation. 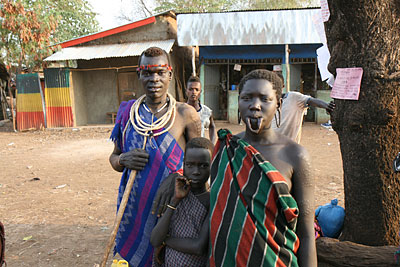 An enterprising boy, Abraham, proposed himself as a guide to the Mursi territory: he could take me there by bus. Without any information about what to do in Jinka and how, I thought I had no choice but put myself in the hands of a tourist operator, always a hideous prospect to me. Therefore, I couldn't have been happier at the idea of using public transport and going accompanied by a child who could only speak two words of English. It tickled my spirit of adventure; it was just what would make the trip worthwhile. The Spanish girls changed some money for me, and I would be ready to leave at dawn.