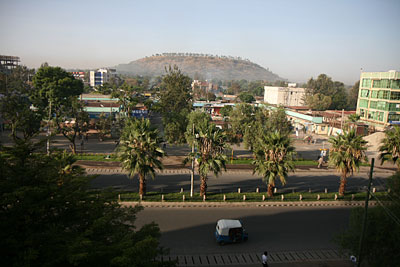 Abraham was a good guide, but I realised too late I had made a mistake by accepting his help because in accompanying me he had missed two days at school. When it occurred to me to ask about that, he candidly admitted he was playing truant. To make up I made him revise his English as we walked on the road. He didn't seem too keen to learn, but I explained that a professional English-speaking guide fetches more money and finds work more easily, so it was in his interest to be a good student. I hoped this practical aspect constituted the best motivation.

I return to Addis in only two days, a journey that on my way out had taken me three weeks.

I passed Key Afar market on my way to Konso, but I felt I had already seen the best at other places. Konso was also living its weekly market day, and people were lingering in the streets and stayed on in bars until late for a drink in cheerful company. On that only day of the week did the streets enjoy some lighting and those few lamps were enough to create a festive atmosphere. The next day I moved on to Arba Minch, then Sodo, Shashemene and finally Awasa thus backtracking on the long way I had come along over a span of time. It took me all day to reach the town I had chosen to spend my last night, Awasa.

I got a great room that turned out to be very cheap. The fact was that there was no running water that night, but in spite of both the staff and the management being aware of the problem, they were selling rooms regardless without warning the guests. After repeated enquiries I realised I'd never get water, especially when I saw workers hoisting a big new tank on the roof, so I had a shower with buckets. However, the next day I complained at the reception and insisted on talking with the manager. When I got a refund I also got thumbs up from the reception staff who were secretly taking my side.

It was another weary day to get to Addis. I thanked the foresight that had prompted me to anticipate the departure by one day in spite of optimistic official bus times, or I'd never have got to Addis Ababa in time for my flight. I arrived just after sunset which shattered my plan for a visit to the market, but it had been such a fantastic trip, so what did it matter in the end?