A lot of ink has been spilled about Auschwitz, and when I visited I felt that whatever I said, my words would be just too many. Having read Primo Levi's Survival in Auschwitz only a few months before, my memory was still fresh about the description of the places and life in the camp, and also the social dynamics that established themselves among the inmates. That extraordinary account depicted something that is no more, but lives on in our collective memory as the horror of contemporary history. The former extermination camp is now the domain of free-willing visitors rather than a place of confinement, but the stern brick buildings, now vacant, still stand to tell their appalling story.

What took place there is so hard to believe that the current of revisionist "intellectuals" has ridden the wave to culpably negate what was declared by survivors, documented by witnesses' accounts and admitted by the very perpetrators. I once had the disagreeable experience of talking with a man from Gaza who supported this thesis: I concluded in disgust that with such people it's not even worth arguing.

As the guide provided the macabre description of the facilities, my feeling was that I needed to take it in by myself – if only I had been allowed to visit independently. Sometimes I strained to hold back the tears that filled my eyes, I wanted to let my emotions surface, feel them and let them subside. I wished I could be left alone and meditate on the site, on my own. So, when the group visit was finally over I returned to stroll among the buildings surrounded by the ominous double fence of electrified barbed wire, and let my imagination fill the vacuum that reigned over a disused place, kept alive only by battalions of harmless tourists. Without the guide's intermediation the camp talked to me and I was again swamped by a surge of feelings.

There were several blocks whose corridors were hung with three rows of framed black-and-white pictures, hundreds of them. I paced slowly to gaze at each face in the portrait gallery. With ruthless fastidiousness every prisoner was photographed on the day of internment. Each portrait showed birth date, profession, and death date. I could quickly work out the age and the duration of imprisonment, but more touchingly I could scrutinize those faces and hear from each the story of their owners. Some had a candid look, some a rascal's appearance, some eyes betrayed a life of hardships, other showed learnedness and high standing. My boggled mind stranded trying to imagine their lives before they were apprehended, their family relations, they place of work, their former experiences – all was written in their expressions, in the creases of their wrinkles, on their open foreheads, in their innocent eyes. Whatever their paths of life, all were doomed to converge in a place of torture and death. 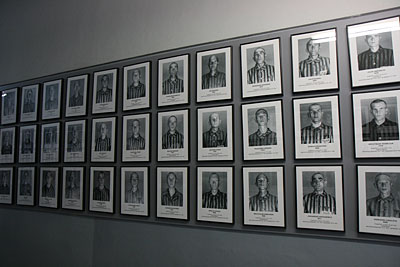 Another strong moment was when I reached the much bigger camp of Birkenau. As I crossed the entrance gate, along which passes the railway line, I saw a group of people huddled together singing aloud. I thought how inappropriate of them to desecrate a place of memory with a braggart's act. But as I drew near them I saw some were wearing a kippah or an Israeli flag over their shoulders, and by the time I was abreast of the group, those young people, still embracing one another's shoulder, had reached the end of what had sounded like a national anthem and were slowly walking towards the gate, following the rails, now intoning a sad song. I didn't need to put myself in their shoes to feel the poignancy.

A week later I watched my photos one evening. When I got to the ones of Auschwitz I had the idea to play the Nazi song Die Fahne hoch. An abyss opened between the playful march and the evidence to the crimes committed by the most aggressive form of racism history has ever known. How many people were duped into following blindly, or guiltily. The music played on and the images reeled in front of my eyes stirring the biggest sense of incomprehension. Why? was the only reaction I was able to voice. 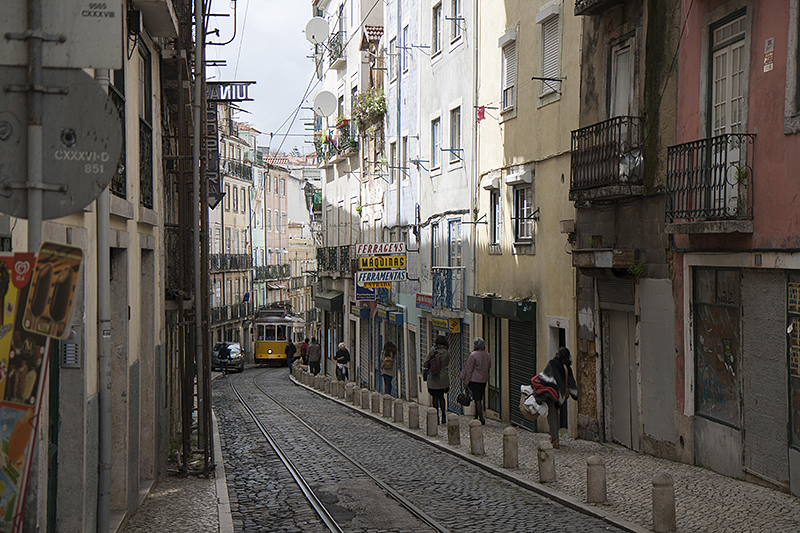