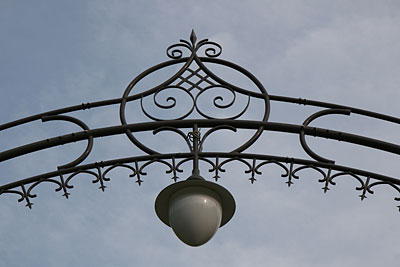 I had read about Kudowa Zdruj described as a pleasant town and was curious to check it out. From Kłodzko I rode a bus into the mountainous area toward the Czech border and after an hour's drive I was dropped at a stop along the main street a bit off the centre. From the start I was struck by the pretty period buildings whose style witnessed to the heyday of spa towns – a happy marriage between wood-and-brick mountain architecture and Art Nouveau decorative patterns. Then, in the town centre, stood the most impressive buildings, i.e. the historic Fürstenstein sanatorium, now called Polonia, the Zameczek and the Kurhaus. I felt amply gratified.

As my eyes rejoiced at the view of the perfectly tended park with majestic trees and not yet blooming flowerbeds, my mind went to a short story by Katherine Mansfield, In a German Pension, which I proposed to read again. As far as I could remember, it described the early 20th century atmosphere of an unnamed spa town where prim bourgeois characters were spending their holiday. Somehow it could have been set in one of Kudowa smaller hotels, I reckoned, maybe like the one I put up at. The grand Fürstenstein, on the other hand, must have hosted aristocratic guests nominally coming to treat imaginary ailments, but with the real purpose of being on the jet set scene where business, politics and gossip were all on the daily agenda.

Kudowa seems to relive a second youth today. The park is as stupendously trimmed as it must have been 100 years ago, and yet the changes are evident. The former upper-class visitors are now replaced by characters that already from a distance stand out for the gaudy garments they wear, their unrefined poise or an ungainly gait. There is not much distinction in the human landscape, nor is there in the amass of signs that encumber the façades of many a beautiful building. Therefore, when I caught sight of an elegant lady with a pretty hat, a white hemmed dark blue suit and a walking stick, she didn't seem to fit. My surprised eyes lingered on hers for a little longer than was required by good manners, and I quickly concluded that she must consider me the coarse one.

In the evening performances take place nearly every day in the theatre, but they start terribly early after people have finished dinner at a time when I could take a late afternoon snack. Having to choose between two alternatives I opted for the obvious one in a spa town, the waters. I went to the Kurhaus pavilion and drank a glass from each of the four taps that spurt out mineral water at intermittent puffs. The fizzy liquid tickled my tongue while its sulphurous smell penetrated my nostrils. Around the marble fountain tropical palms reached to the roof behind tall bay windows. It was a pleasure both to the eyes and the taste.

The hotels are now equipped with modern hydromassage and I chose the historic Zameczek. The relaxation was complete, but the water not as hot as I expected. As soon as I put in my foot I knew I would get a cold, which happened punctually after a few days. 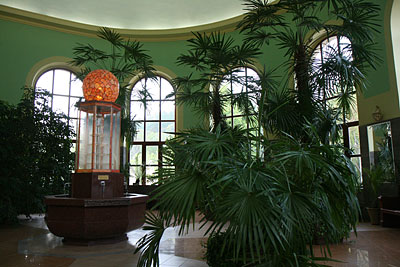 The Table Mountains, approximately 10 kilometres from Kudowa, are a singular sight. The strange rock formations on their flat top are unique and a walk along the trail also offers rewarding panoramas. I also wanted to visit the Rock Labyrinth at a distance of a few kilometres, but walking on the circuitous main road to reach it would have been too long a detour. Examining a trail map on a board I spotted what looked like a shortcut. A side road approached the northern side of that other mountain and from that point I imagined there should be a trail to reach the top. I snapped the map for reference and crossed my fingers. The solitary road was in fact a wintertime cross-country ski trail. Tall pine trees formed an impenetrable fence on both sides and I dreamed of skiing in the freezing temperatures on the snow that must stay crisp for long months at an altitude of barely 1,000 metres. After a long hike I did finally reach the Labyrinth and was surprised at even stranger moulded boulders that form an authentic maze of narrow crevasses where I had to squeeze, crouch and crawl to slide my body through. It was fun.

The araucaria seedling I bought at the castle palm house was waiting for me on my room balcony. I hope it'll make it back home without any problems at the airport security or in the bag where I'll have to hide it.