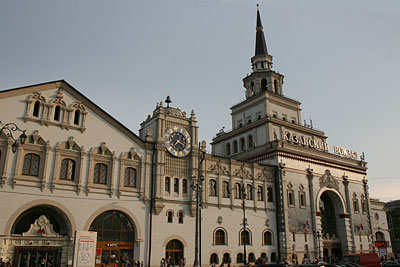 I didn't have much time left in the afternoon I arrived in Moscow, but I couldn't possibly miss the date with my Italian friend. It was "make or break" on that day because she was there only until her night train left from Kazan station, which is where we decided to meet. I hadn't seen her for a few years, and oddly enough, I was going to catch up with her in Russia, of all places.

Gianna goes every year to the town of Rossosh, which was the theatre of the epic battle of Nikolayevka in January 1943. In the harsh continental winter, the Red Army, which had already succeeded in pushing back the invaders, tried to block the way of the retreating Alpini soldiers. It was only through the determination of commanding General Reverberi that they managed to make a breakthrough around the village of Nikolayevka. 4,000 combat troops followed the General who yelled "Go forward, Tridentina!", and thus 40,000 extenuated stragglers were able to reach the new Axis front in their wake.

4,000 combat troops followed the General who yelled “Go forward, Tridentina!”, and thus 40,000 extenuated stragglers were able to reach the new Axis front in their wake.

The casualties of the campaign had been staggering. In recent years the National Alpini Association established a partnership with the town of Rossosh. They didn't erect a monument to the fallen in the battle, but rather donated a kindergarten built on the very ruins of the former Italian army headquarters. With a degree in Russian, my friend worked as an interpreter when the building was underway, but since then she has been going back to Rossosh every summer to offer courses of Italian language and culture. She has established a lasting relationship of love with her second hometown, the very place that cost the lives of so many soldiers.

I was coming out of the underground station with my mind absorbed in all these facts. My eyes passed over many different faces as they rushed down the steps in the opposite direction, but in the crowd I saw the surprised face of Gianna who was coming to meet me nearly half an hour before the appointed time. She was accompanied by two university students who would give her a hand with the teaching and in the meantime would enjoy the opportunity to practise their Russian. They had arrived in the night, had stayed in the airport until daybreak and had been sightseeing around Moscow the entire day. 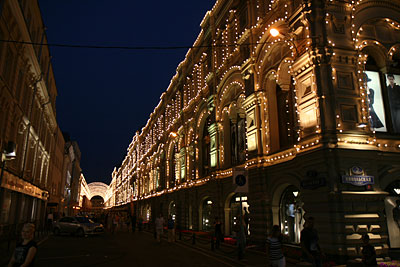 The two girls were hardly able to speak from tiredness and only Gianna seemed to be her usual talkative self. Over supper she informed me of all the new activities she had planned for this summer course and anticipated the warm welcome from the people of Rossosh she is now on such good terms with. Such beautiful bonds of friendship across frontiers, cultures and languages are probably so much stronger as they need to wipe out the tragedy and the horror of war, I wondered? Maybe not, after all, because humanity is not made up of only selfishness and quarrels, hatred and envy. It is also solidarity and friendship, love and kindness, and not always in atonement.

As night fell the sky was becoming a beautiful dark blue, while artificial lights illuminated the monumental facades of the three train stations straddling a big thoroughfare. I left the three girls on the threshold of Kazan station where they would find their train ready to travel the night's ride to Rossosh. I walked back to my hostel crossing the centre of Moscow, starting to find my bearings and passing the landmarks of the city, amongst which a beautiful Red Square lit by the myriad light bulbs hanging on the Gum building opposite the Kremlin. It promised to be a good interesting trip.