Suzal was a pleasant town to visit, only mildly touristy and with a pronounced rural character about it. Its houses, churches and monasteries with extensive green areas in between were practically scattered in the countryside astride a slow-flowing river, to the effect that it looked more like a village than a town in its structure. I hopped around the various religious buildings and finally reached the Kremlin compound. Then, from the tall bell tower of a nunnery I contemplated the itinerary of my day's roving.

Parish groups of elderly ladies were led around by black clad priests. These clerics with long hair tied behind their neck in a short ponytail, accompanied groups of devout women who wore modest dresses and headscarves. They didn't miss a single church and of course not a single precious icon. In a flash I feared that if I pursued my itinerary along the Golden Ring I might become like one of them, overflowed with visits to religious buildings. I was reluctant to have an indigestion for eating too much of the same dish, so the idea that I had been brooding over since I heard of Kazan came to the fore: I could take a night train to somewhere out of my planned itinerary and, who knows, maybe follow that route to somewhere else still undefined.

I could take a night train to somewhere out of my planned itinerary and, who knows, maybe follow that route to somewhere else still undefined.

St Basil's cathedral on the Red Square had been my inspiration, having been built to commemorate the conquest of Kazan in 1552. At the time of the war with Russia Kazan was a prosperous Tatar khanate that in its turn had replaced the mediaeval Mongol Golden Horde. Expansionist goals achieved, the ensuing process of assimilation into the czarist empire was marked by the finding of the legendary Holy Lady of Kazan's icon. Religion came in to sanction and sanctify the military feat: the sacred image, not a mere pictorial representation anymore, but endowed with own divine life, was promoted to the rank of protector of Russia. Now allegedly lost, this icon, even though in absentia, is still one of the most venerated in the Orthodox world, and several churches across Russia are dedicated to it. In the meantime Kazan had been russified and the Muslim Tartars relegated to a secondary role until the last decade, when the resurgence of local autonomies also boosted their nationalist cause. 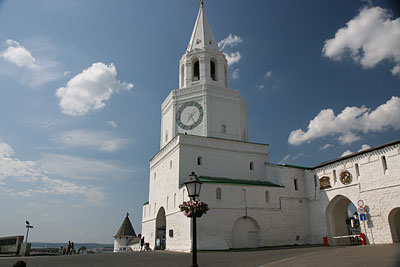 I arrived at Kazan by the night train, the first in a row of overnight trips that with various degrees of comfort would take me around this one-month, nearly 6,000 km long route in Russia. Within an hour of my settling into the hostel room I was ready to go out and explore Kazan. I walked aiming at the Kremlin, and there met a local Tatar man by the gate. Renato he said his official name was, but it was only to meet the revolutionary requirements that had tried to wipe out names with a religious background. Now he liked people to call him Murat. He had characteristic facial traits and a friendly attitude.

Apart from this welcome, my impression of the Kremlin was not as positive as I had expected mainly due to its tampered appearance. The Thousand and one nights Qol Sharif Mosque, recently built at the spot where a historical mosque used to stand, is impressive at first, but a second look reveals an out-of-place Gulf style that completely betrays the Tatar heritage. From the Kremlin walls I could see the mighty Volga swelling to the dimensions of a lake at the confluence with the river Kazanka. It would be another faithful companion in my next week of travels towards the south. Implicitly I had set myself a goal that seemed ambitious because of its distance, but attracted me greatly because of its historical significance: Volgograd. The pace of this unintended route had been determined by the fatidic encounter with Gianna in Moscow.