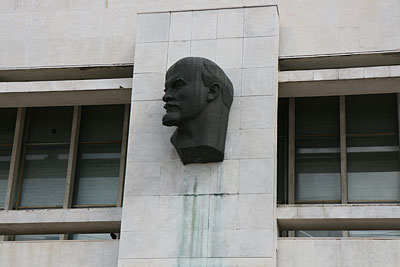 I was dumped unceremoniously at the side of a suburban road going into Ulyianovsk. From there I hadn't the faintest idea of how to get to the town centre: the bus stops gave no useful clues and the people around would only speak Russian. I went up to the ticket booth and tried asking the seller, who suggested I take number 4, adding it would be a tramcar. Between two traffic lanes a strip of land overgrown with weeds was reserved to the tramway: every now and then the cars could be seen bobbing up and down, struggling to stay within the frame of the battered rails. A mesh, or a mess, of overhead wires was designed to supply power to the tramways on the backdrop of depressing blocks of flats. The asphalt itself was not any better, riddled with potholes and lined with pavements that must have known better days. But this unkempt suburbia, although probably not the place where I'd have liked to spend the rest of my life, struck me as fascinating. It conjured up a certain idea of Soviet times, in the very place that was Lenin's hometown.

I boarded a number 4 tramway. The conductor – that omnipresent figure who superintends the running of every public transport vehicle in Russia, unashamedly flouting the rules of lean management – didn't know, or didn't understand, my request. Two elderly men felt called into question and did their best to help me. One could even speak a little bit of stammering English. We jolted towards the centre lulled by the erratic motion of the tramway, but the dull buildings still dominated the grey scene, aided by a clouded sky.

They wanted to show me the Volga naberezhnaya, or embankment, but the real goal of the outing was certainly not the night stroll.

The stairs up to the hostel were not its best presentation, but I was prepared to much by then. Everything seemed to match the same rundown appearance I had been welcomed with in other parts of the town. A young beautiful receptionist with an expressionless face and an icy blue look registered my personal details, and I proceeded to my room. Two young men on business from Perm welcomed me – the rest were Moldovan gypsies who the first two defined as "russified". I should be careful about my possessions there, they warned. Thanks to a tablet with an online translation feature we quickly got to know each other. They came across as friendly and well disposed to communication. Igor was born in Doshambe, where his family were civil servants of the USSR. Later he resettled in Perm, but had always brought the warm weather of Tajikistan in his heart, while his hate of the long Russian winter grew in intensity.

After supper I accepted their invitation to go out for a walk. They wanted to show me the Volga naberezhnaya, or embankment, but the real goal of the outing was certainly not the night stroll. This became clear from the question they asked me as soon as we set foot out of the hostel. "Where would I like to go drinking?", they enquired. I managed to put it off until after the walk, when a similar question was popped again: "Would I prefer Ukrainian or Russian beer?"

We settled on Ukrainian, and they led me to an attractive pub with rustic wooden furniture where they ordered a huge stein of beer for each, apart from cold cuts, pickles, mushrooms and a flavoured lard spread. The sweet honey beer, big as it was, was just starters. When we had been drinking for a while the waiter was beckoned, and I heard them parley about 50 grams of something. It could well have been ham or cheese from my experience of ordering by weight, but the shot glasses that came left no doubt as to the liquid being vodka. With time another huge beer was put in front of each of us, and we were not even halfway through it when another 50 grams of the white innocent-looking liquid came along. To cut a long story short, the next morning the hangover confirmed that innocent it was not, but at least I had the memory of a lovely night out. 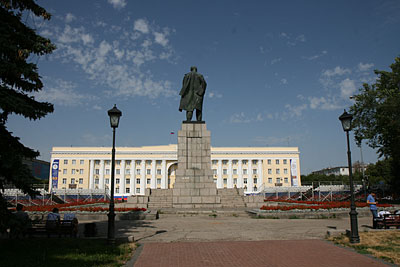 With a strange feeling in my body I left my friends still sleeping and went out to visit the great Lenin memorial. The embankment offered a view that swept over the artificial lake formed by the Volga from the height of the 750 odd steps that lead down to the bank. When I returned I took leave of my friends who were also moving out. I took a bus to the station and passed a shopping centre plastered with all the familiar trademarks that suddenly I was ashamed of recognising. Surely the country that proposed itself as an alternative to the West, the very town where Lenin was born couldn't have fallen so low. Only the battered tramcar rails and the haywire cables stretching between the posts infused a little bit of hope into me – just like the vodka that had run into my veins the previous night.