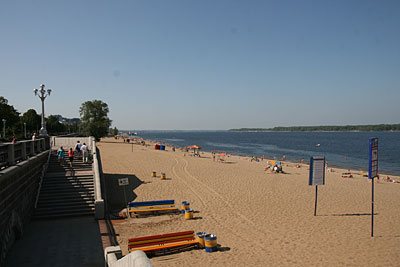 I was staring at the theatre built in dark red bricks with a high-contrast adornment of white window trims and gables. The air was hot and dry, the sun glared high in a clear blue sky, a perfect continental summer day. Looking across the street I could see another few buildings, all belonging to different styles, that illustrated so well the richness of Samara's urban fabric. So far my stroll had been like a visit to an open-air museum on the history of architecture.

As I took a rest after many hours of uninterrupted walking my eyes tried to analyse the scene. A rationalist block painted a pale yellow with large windows inserted between rows of white lesenes – the combination of candid white decorative elements on a pastel colour background, like beige, is often found on Russian neoclassical façades and is always strikingly elegant; an undefinable building with relief elements that reminded of cannon barrels around its plinth – its proximity to Stalin's underground bunker may have played a role in the design of this militaristic structure; a lovely wooden chalet, typical of the countryside, but of which many examples, quite often in a battered condition, are scattered around Samara; and finally a Soviet rationalist block with a big red star painted towards the top of one of its sides, and a big clock on a rounded protruding body.

Samara had been a surprise since the early morning. I had walked toward the Volga embankment to find a beach of golden sand caressed by a gentle breeze that brought down the hot summer temperature to refreshing coolness.

It was a feast for my eyes, and this last structure was particularly attractive. I couldn't stop myself from taking a picture of the happy effect produced by the juxtaposition of its variously-shaped volumes. Of course I knew it was a military headquarters, but I conceded that in the era of online maps and street views the ban on photography might be interpreted in a more relaxed way. However, in spite of my low-profile attitude and waiting until the soldier standing on guard was looking away, a loud voice shouted a menacing warning, which I acknowledged raising my hand and walking off. The offending photo had been shot anyway.

Samara had been a surprise since the early morning. I had walked toward the Volga embankment to find a beach of golden sand caressed by a gentle breeze that brought down the hot summer temperature to refreshing coolness. Well-tended flowerbeds and urban fixtures embellished the waterfront promenade and below it, families could be seen sunbathing on the Sunday morning, children playing with the sand, elderlies paddling in the water. In a special area, a number of fitness machines were available for gymnasts. I worked out on a treadmill, then tried the overhead ladder, which had ascending and descending rungs, and nearly cost me a sprained shoulder.

The town was not all spick-and-span. Some buildings were in bad repair, but still emanated an aura of splendour. After all, Samara had been designated as the provisional seat of the Russian government and foreign embassies if the Germans had succeeded in invading Moscow. That never happened, but all was ready to serve as a temporary capital. Some aristocratic palaces built by wealthy people are now used as a dwelling place by humble families because, in spite of their glorious past, the state they are in now only make them fit for this purpose. Flimsy panes on rickety peeling window sashes upstairs match a jungle of commercial signs over the shop fronts downstairs, a legacy of today's Russia. 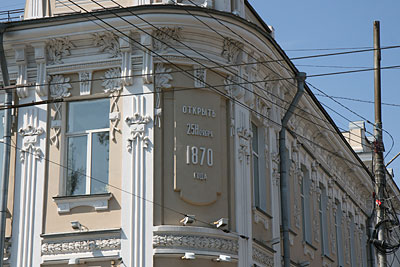 I was finally attracted by a group of smokestacks. The historical Zhiguly brewery had an outlet that sold draft beer over the counter. Volga cruise tourists queued for the refreshing liquid holding empty large plastic bottles or even tanks. Next to the queue a couple of stalls offered dried fish to gnaw at with the beer. The 100 year old brewery consisted of several brick buildings lining the street, and the inner yard could be peeped at through the gate. But the smokestacks I had seen from the hill were not these. They belonged to the imposing clinker factory nearby, a production line of imposing proportions and pleasant appearance that rejoiced my eyes once more. But it was not the last time because just before leaving for the train station I went out to buy some food and in the twilight I was still admiring Samara's buildings, telling myself I had really found a treasure.