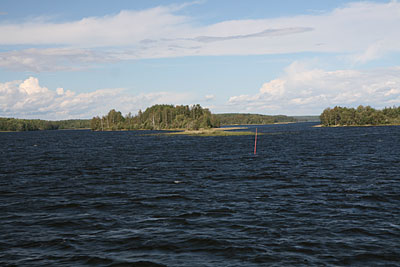 By another night train I headed north to Petrozavodzk, on the shore of Lake Onega, where I arrived shortly before 8 a.m. I crossed the railway line by the overpass and found myself in a depressing part of town: many streets seemed left unfinished and straggled disorderly, new blocks were under construction next to old wooden houses, and nobody was around. The sky was a bleak grey, and I could only imagine how much more dreary it would be in winter. The supermarket at the corner offered some food, but by then I was at my wit's ends after trying all the products that looked barely edible and never coming across anything worthwhile. The Russian writing put me off as far as the content of the packages, and even when I felt reassured by a familiar appearance I had often been deceived. That was why I had promised myself, for instance, never to buy cold cuts again – decidedly sub-standard – or supermarket cheese – perfectly tasteless.

To offset this difficult start the hostel was rather nice. The place used to be a gym, and a modern-looking kitchen had been fitted into the former dancing room. True, even here things looked rather work in progress because there were electricians screwing light fixtures into the ceiling panelling and builders coming and going. Finally, a young man wearing only a loincloth walked into the lounge and set the radio to play a lovely relaxation music to which he did meditation. Watching his state of concentration and his measured movements conveyed a sense of calm and harmony, fulfilling the impression of safe haven after the inhospitable outer environment. That was the owner, who came to welcome me after winding up his yoga session, and we chatted for some time about his home town Petrozavodzk.

I ought to do something of my day, but had serious doubt about what interesting things I might find around. Coming from Saint Petersburg, the contrast couldn't have been sharper, but I went out with an open mind. Even here, I encouraged myself, I could scratch under the plain surface and sharpen my eyesight to ferret out interesting features of this town. I walked to the lakeshore: Onega is the second biggest in Europe, but apart from being big, which in fact doesn't show, it looked only flat and desolate. In the end I took shelter in the tourist office to have a chat with the person in charge.

I felt at a loss in front of the enormous flat wilderness of Lake Onega bordered by the menacing dark silhouette of fir trees.

The next day, the hydrofoil left for Kizhi island by clear weather and the lake and the wooded shores looked much more vibrant than the previous day. Kizhi is an open air museum of wooden architecture from the Karelian region, and it displays extraordinary examples of churches and rural buildings, but it is not endowed with real life. There are museum staff with traditional dresses that illustrate the rural occupations, like weaving, spinning or iron beating, but it felt a bit artificial. The real value of a visit to this island was the feeling of loss in this enormous flat wilderness of water bordered by a menacing dark silhouette of fir trees on its shores.

In the evening I had to solve the dilemma of where to continue my journey. To be true, I felt the fascination of the north, but I was also aware how elusive it would be, scattered as it was on an unimaginable vastness that my logistical possibilities were unable to cope with. Besides, its beauty would be subject to the whims of the weather. The hostel receptionist praised the beauty of his town on the White Sea, and showed me some winter photos. The fact that my roommate had come from Togliatti to do rafting in Karelia also helped me not to feel put off by this cold Scandinavian environment. I was tempted to keep on searching for the essence of Karelia, but I was loath to take the 8-hour journey to Kem: I would go to Sortavala on Lake Ladoga. 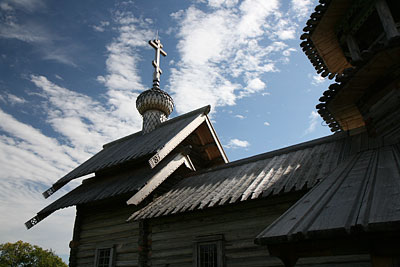 Be as it may, I arrived at Lake Ladoga in annoying rain. The receptionist had got me in touch with a friend who came to receive me and helped me find a hotel, but we were at a loss to communicate in a common language. When the rain stopped in the evening I went out for a walk to find that the sunrays were tinging in terrific sunset light the buildings on the lake shore that reflected in perfectly still water. It was an idyllic sight, but that half hour was pretty much all I was able to feel attracted to in Sortavala.